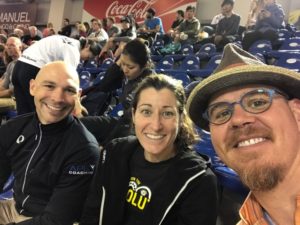 This last weekend I had the great opportunity to attend the Tissot UCI Track Cycling World Cup competition in Los Angeles. Although I have seen local track races and watched competition on television, this was the first time I have attended a true international competition of elite racers, and let me just say, “Wow! Track Cycling is Awesome!!” I have been a bike geek my entire life, and have had my fire rekindled by the Precision, Power, and Strategy required to achieve in this upper echelon of Cycle Sport. 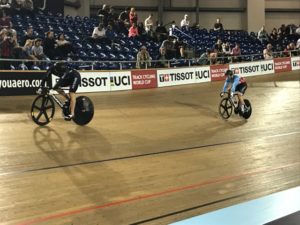 The first thing to impress me about racing in the velodrome was the exacting precision of riders, bicycles, and organization of events in the competition. Riding a fixed gear bike with no brakes on an angled oval track requires a tremendous amount of bicycle handling skill. Competitors are often weaving in and out of position, with mere inches to spare between each other, at maximum velocity. More exacting than the athletes, the advanced technology in frame material, wheel, and geometric design of track bikes is astonishing. There requirements for different wheels, and the different bike styles for the Sprint, Time Trial, and Team Events are so precise that each bike is compared to a jig by a UCI official before every race! Once on the track, Velodrome racing is as precise as a swim or track meet. Racers are only allowed 2 false starts before disqualification, strict rules must be followed in each discipline on the track, and races are often won by mer hundredths of a second. 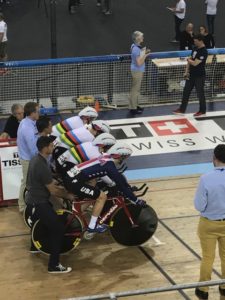 In addition to the exceptional skill of the riders and amazing technology of the bikes, the sheer power of track cyclist is unparalleled. Unlike road racers, who often look thin or even emaciated at the end of a big stage race, track cyclist are thick, muscular athletes with massive quad muscles and strong upper bodies. Some of these athletes are able to reach and sustain over 60 kph on the track and push over 1000 watts! Standing on the skirt around the track you can feel the power of the riders as they come whipping by at maximum velocity. Simply awesome!!

Even more impressive than the precision or power required for track cycling, the chess match-like strategy required to master each of the different velodrome disciplines is unrivaled in other forms of bicycle racing. From the individual sprint races, which start out at a snails pace and competitors often stare each other down in a caging and calculated dance to gain the ideal inside position before exploding into an all-out pedal-to-the medal sprint, to the Keirin, Maddison, or Scratch races that require perfect pacing and exceptional skill using the track and draft to arrive in top position for the finish, track cycling requires keen strategy, a sharp mind and lightning fast responses. The mental skill of these racers blew me away!

I can honestly say, having been a cyclist for 40 years now, that the poetic precision, the massive power, and the calculated strategy of Velodrome Track cycling has gotten me fired up on bicycle sport in a whole new way. You have to get out and see this form of racing, it is truly amazing!