Some of the cyclists participating in the ride, which had three routes ranging from 30 to 62 miles, reported seeing anti-cycling graffiti on rocks near 9000 Black Mountain Drive and on the asphalt of Brook Forest Road, said Mark Techmeyer, a Jefferson County Sheriff’s Office spokesman. Jefferson County Sheriff’s deputies received a call about the graffiti at 11:30 a.m., he said.

“There were some very encouraging words spray-painted that said, ‘You’re almost there’ and ‘Good job,’” he said. “Then someone came behind with blue spray paint and wrote some negative stuff.” 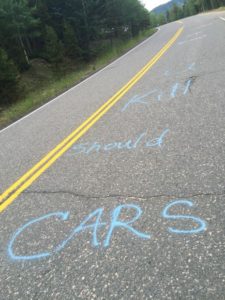 That included phrases such as “You should die” and “Cars should kill u,” according to the Jefferson County’s Sheriff’s Office and a photo provided to the Denver Post by a participant in the ride.

Skip Thurman, a 51-year-old Denver resident, was participating in the ride with his wife and the couple counted eight negative graffiti postings along an 8- to 10-mile stretch of the route north of Evergreen.

“We’re 30 to 40 miles into the ride and on this pitch that goes straight up,” he said. “People are putting encouraging words, like ‘You can do this.’”

The incident is classified as second-degree tampering, which is a Class 2 misdemeanor that could result in jail time, JeffCo’s Techmeyer said.

Anyone with information about the incident is asked to call the tip line at 303-271-5612. Tipsters can remain anonymous