Anyway, I decided to try on this weekend’s adventure. I’d take more photos and videos so I could write about it, remember it, and then sure, post on Instagram. Today’s blog is going to be more of a photo essay than an essay-essay. Fewer words, more instagrammable content.

We started our journey from Castle Rock to Monument at a brisk 7:00 AM. Marc and I met at Jackky’s place and it was brisk. I thought I’d keep my arm warmers and jacket on a lot longer than I did because of how chilly it was. Sometimes I think I need to harden the hell up (Rule #5) and other times I’m like, “nah, I don’t want to be miserable to prove a point anymore.”

We just started climbing and climbing, so yes, I got sweaty real fast. It didn’t help that I was also on my period and my body temperature was naturally warmer than usual. I ditched the jacket within 15 minutes or so of the ride. 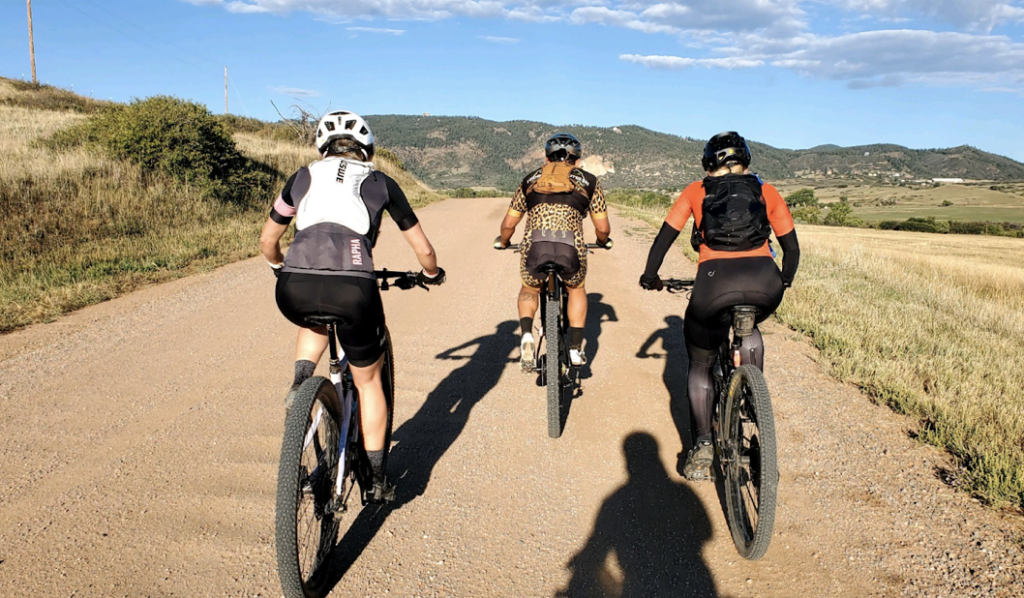 Mountain bikes were the bike choice for this ride even though there wasn’t any single track. It was more to make the ride comfortable as we pedaled over washboard after washboard. I’ve ridden parts of Rampart Range Road on a gravel bike and yes, it’s worth using the mountain bike for the extra cushion. I guess, that is if you have suspension on your bike. It’s the suspension that helps get through all those washboard roads.

Before we hit Jarre Canyon, I had to pee. I remembered the Velocio bibs I was wearing had the FlyFree, which meant I could pull down the bibs from the waist, squat, and pee—without having to take off my jersey, backpack, etc. It was awesome. I hadn’t used the feature before, but it did make everything a lot quicker. I don’t know how it’d work in a porta potty though. Will I be able to move it far enough away so I don’t end up peeing on some of the material. I’ll report back.

When we made it to Rampart Range Road, there were a ton of dirt bikers. Some were fine. Most were jackasses, especially when they drove by in their cars, zooming past us without giving us much space. 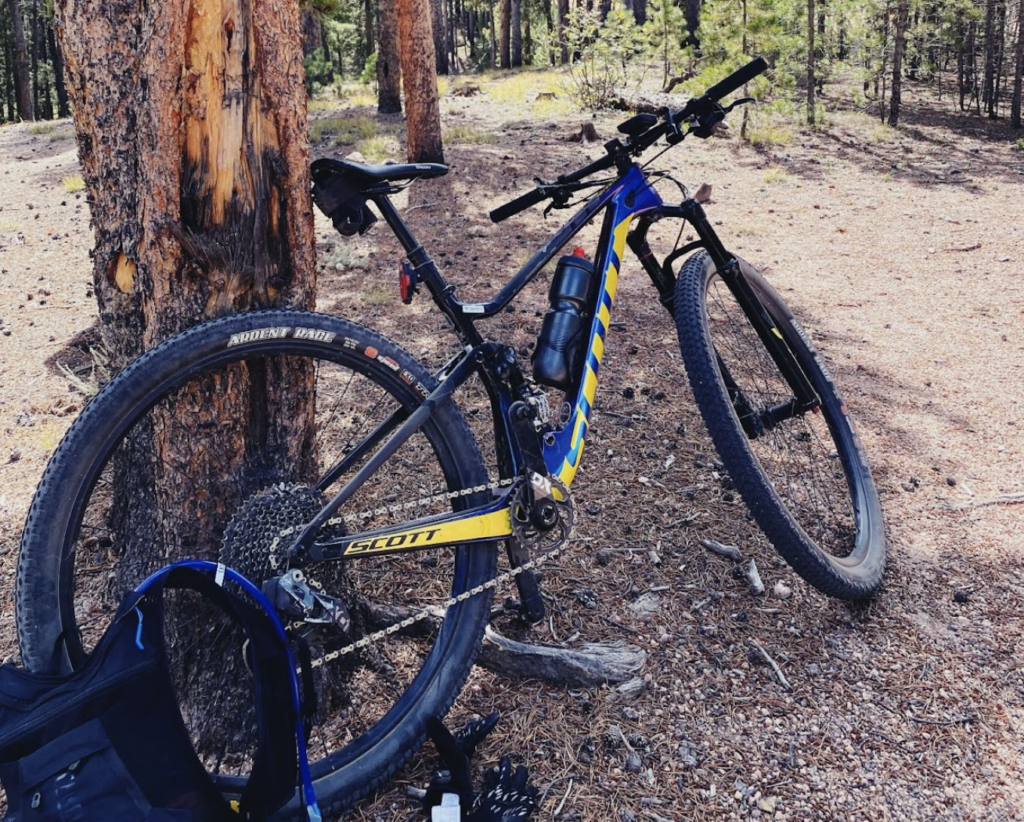 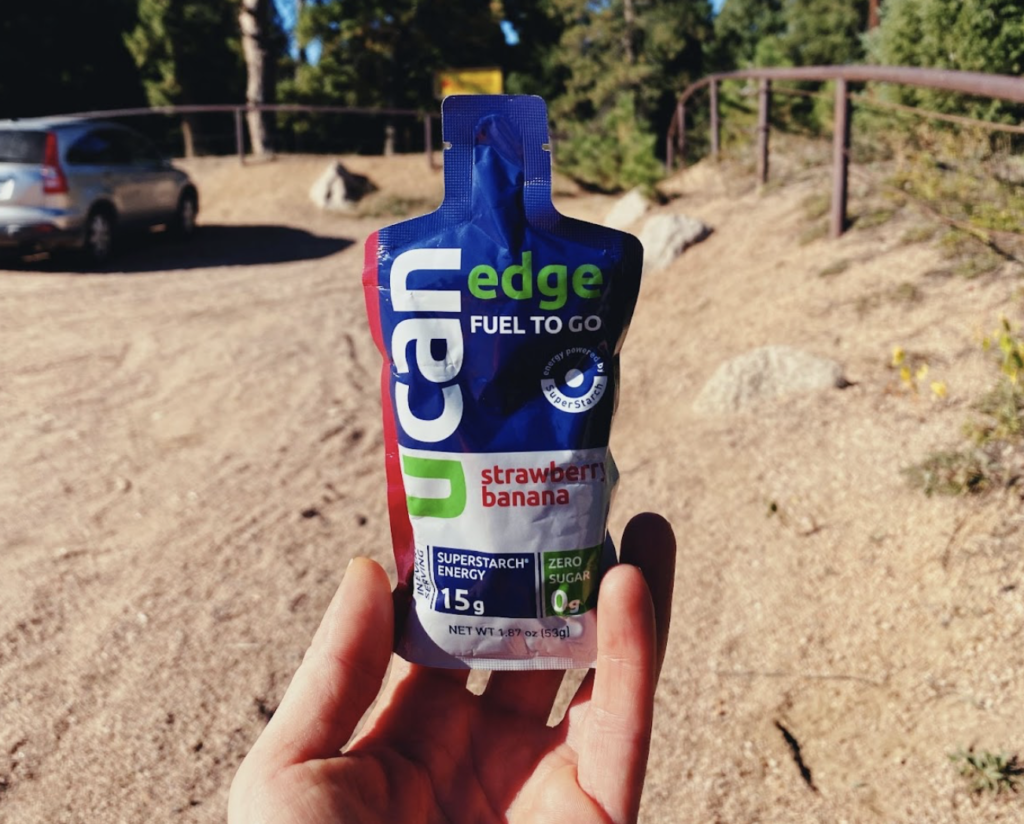 The important thing when tackling a long ride with a ton of elevation gain is pacing yourself. And I think our group did that wonderfully. Going out too hard in the beginning is easy to do because you’re feeling good, you haven’t tuckered your legs out yet, you haven’t gone through all your nutrition. The world is your oyster.

But then halfway through, your legs are fatigued, your lower back starts to hurt, the saddle is rubbing your crotch raw and you still have a long way to go.

We pulled over to take another break and because we lost Jackky for a minute (he was over refilling his water bottle). As we stood there, I had my Gatorade gel and Marc suggested we go check out a compass. 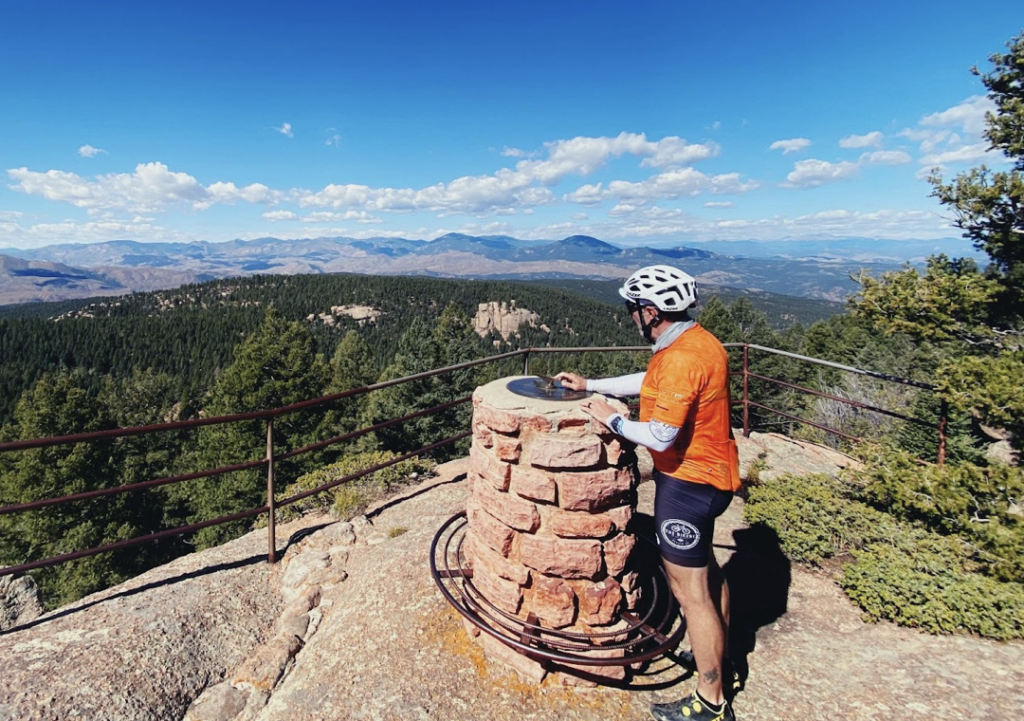 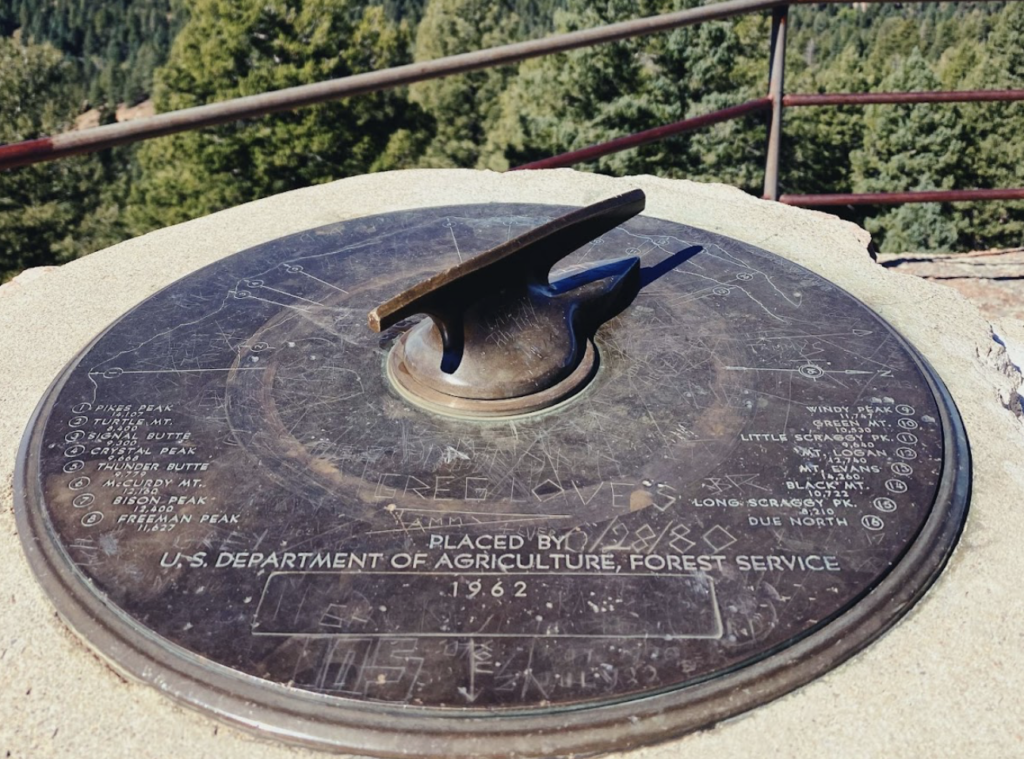 I thought it was a few steps away. Instead, it was about a half mile, which I was fine with. I was just worried about my bike getting stolen.

It was a killer view and a place that would be awesome to sit down and have some lunch. I only had some energy chews and a Bobo’s bar which I’d hardly call lunch. We hiked back to our bikes in our cleats and luckily, they were still there.

Then we continued our ride.

The hills were neverending. It was a wave you just had to keep riding. The road would tilt up for a long way, then down for a short time, then back up. Over and over and over again. But it was awesome being outside, not too many people around (besides the jackasses who’d be flying down the road, come around the turn, see us, and then Tokyo drift, shouting something obscene at us like it was our fault they nearly killed us with their Jeep). 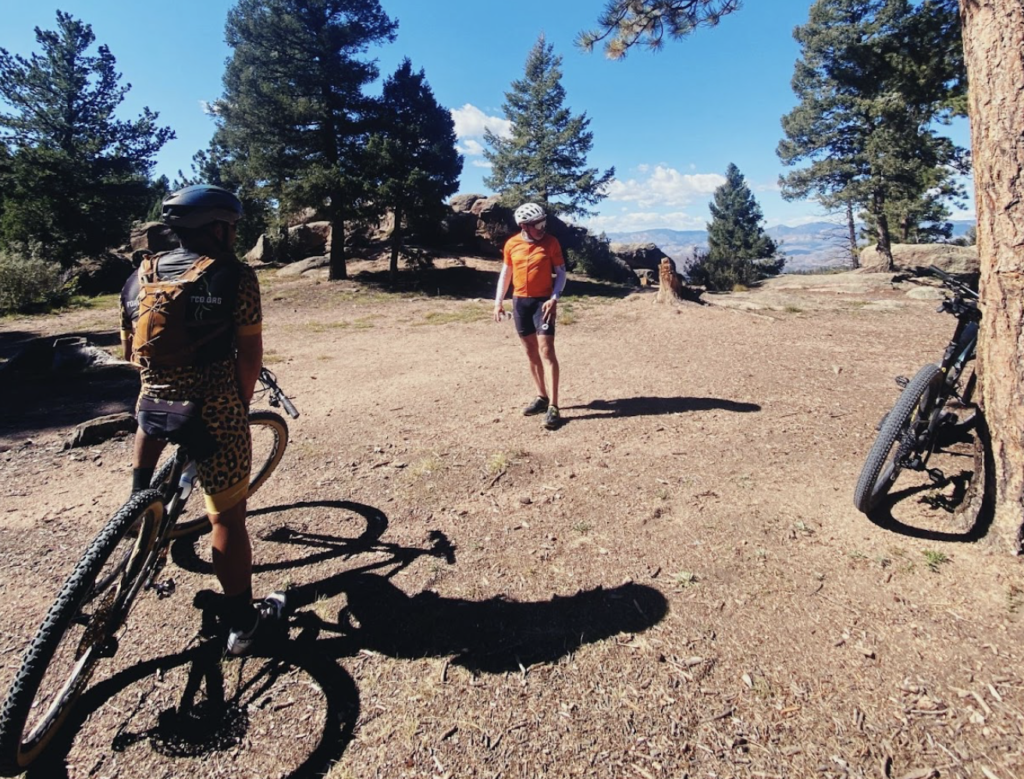 I had my last easily consumable snack. I went pee again with the FlyFree. I reapplied some Chamois Butt’r, and we headed off to what we thought was 10 more miles of this up and down bullshit, and then an easy 11 miles down to town.

We quickly learned that it was more up and down riding, and then finally about 30 minutes of downhill as we exited Rampart Range Road and headed into Monument.

We biked around until we found a place to stop for food. Our ride was already on his way to pick us up. I ordered a breakfast burrito to-go. We all ordered our food to-go because we assumed Reuben wouldn’t be long before he showed up at La Casa Fiesta Restaurant. I usually take a while to eat, but boy, I devoured what looks like a bowl of mush, but was damn good. Anything tastes good after 65 miles and 6,693 feet of elevation gain. 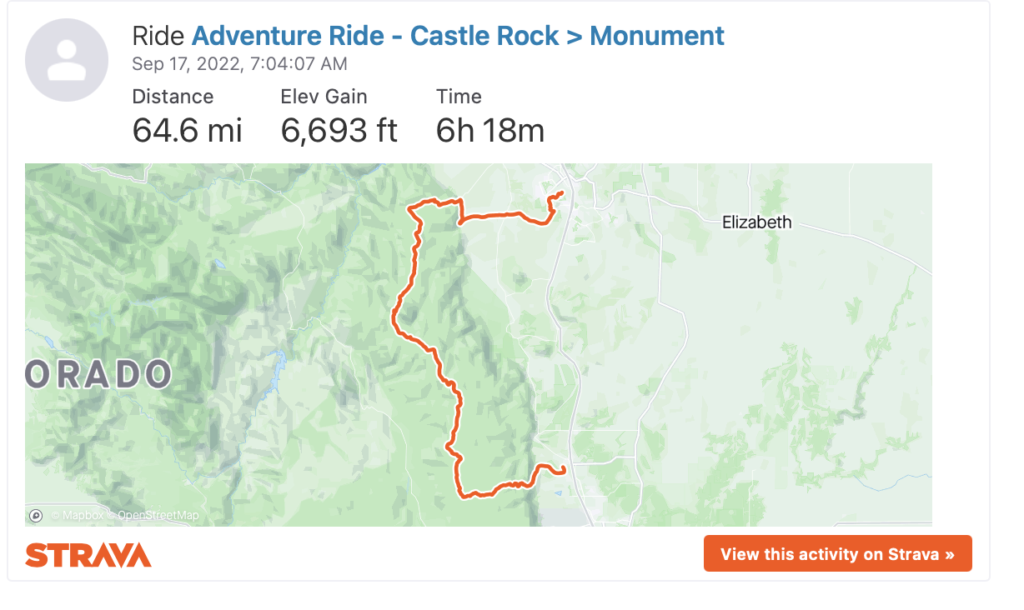