Intro to Cyclocross Episode Six – Pony Up at Primalpalooza 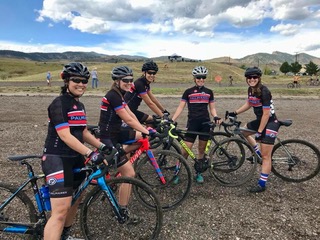 After a month of Back to Basics CX, I figured it was time to pony up, put on my big girl panties, and line up for a big kid cyclocross race. As with most races, riders have an opportunity to preview and ride the course before actually racing it. This time, my team (Palmares Racing) was helping set up the course, which satisfied one of our annual responsibilities as a BRAC club (one of the reasons why I love this cycling community!).

Setting up a course you get to see how it comes all together. As each section was marked, we’d ride through them and make changes if needed. Features were “installed” one by one. Shoveling dirt to build jumps, hammers to drive stakes into the ground which held up barriers, weedwackers to clear tall grassy areas, and then finally the tape was strung through the plastic stakes to give the finished product.

The next day when I arrived the vibe was very familiar to that of CrossVegas, but on a smaller scale. Race announcers, team and sponsor tents, food trucks, and a lot of people riding around on bikes. 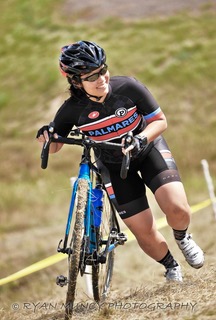 The big grassy hill that was barren just 24 hours before, now had an announcer armed with a microphone, heckling riders as they made their way up. This made me nervous AF.

During my warm up, I was surprised to find areas that were previously wet and grassy had transformed into a mud pits. Awww yeah.

When it was time to line up for the start (call ups in the cycling world), I was excited and nervous all at the same time. I began to chat with another woman who was equally if not more nervous than I was. Her name was Carrie Socia. Come to find out, it was Carrie’s first cross race ever and she had just been interviewed by 303’s Hippy – Bill Plock. Listen to her interview here.

Like motorcross and car racing, riders are called by name in order of ranking. Eight riders in a row, each getting to choose their start spot as their names are called. It was quite the surprise when the Cat 5 women were called up, I heard my name. I hesitated. Tom, the official of the day even said, “come on Khem.” Crap. He knows who I am. Guess there’s no hiding now.

As riders lined up alongside and behind me, my new friend and I chatted some more. I reassured her everything was going to be okay. Take your time, get off your bike when you need to, and just have fun. Reassuring her seemed to help me manage my nervousness as well.

Sitting there like a bunch of caged up race horses ready to go, I could feel the anticipation of the whistle blow. As soon as the loud-pitched tweet rang in the air, we were off heading down the gravel road to start our first lap. 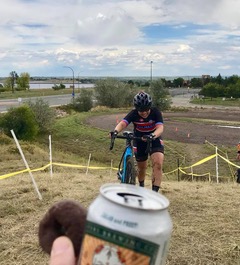 The course was full of fun cross features – tight turns, bumps, climbs, mud, grass, gravel, dirt, stairs, hills. As much of a pain the big hill was, it was one of my favorite parts. One of my teammates was hanging out at the top with donut hole and beer hand-ups. I happily took a donut hole from him and shoved it in my mouth, which was followed by a lot of cheering from spectators. Hand ups was the part of cross I was looking forward to the most. FYI, breathing hard and eating sure is challenging. I’ll remember that for next time! 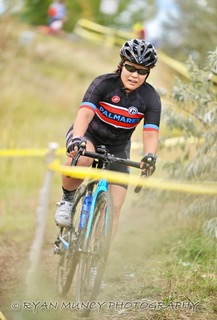 After completing two laps, I was so glad to hear the last lap bell. Just one more. Throughout most of the race, me and another rider kept passing each other. She’d pass me on the more technical downhill stuff, and I’d pass her on the climbs and flats. Eventually I ended up finishing ahead of her. I waited to greet her after she crossed the finish line and thanked her for pushing me the entire race. Her feelings were mutual. Come to find out, she was a mountain biker – just as I suspected. 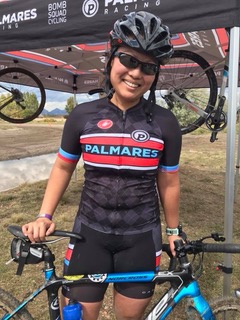 Moments later, my new friend Carrie crossed the finish line and was met by her husband and kids, who’d been cheering her on at different spots along the course. She had such a huge smile on her face. I gave her a congratulatory hug and was thrilled to hear how much fun she had. THIS is what I love about cross. The camaraderie, the challenge, the sense of accomplishment, oh…and the donut hole hand ups!