Bike New York, Needs to Be on Your Bucket List

New York. What do you think about when you see or hear that name? Maybe skyscrapers and bridges, subways and food, ports and people? Iconic sports moments, tragedies, the world’s stages and the ultimate melting pot of culture and ideas? 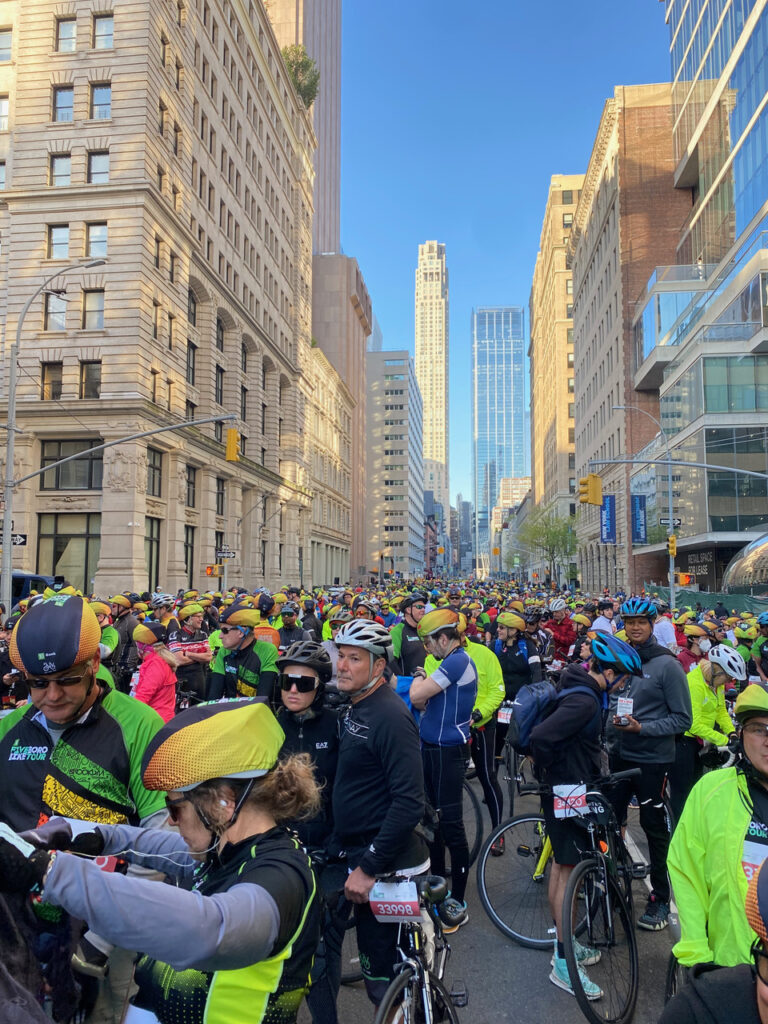 Scattered throughout lives remarkable architecture, intimate cafes, coffee shops and pubs. But of course it’s the people that define this city.  People scurrying about. Tourist seeking a slice of what they imagine New York to be. People gazing at people, elaborate billboards and centuries of prosperity continuously re-imagined and re-built. People sitting, walking, running, and on this day of the start of the Five Boro Bike Ride, 32,000 people are riding bikes.

The spokes for the Five Boro Bike Tour reach around the world drawing cyclists like a powerful magnet gathers metal. Cyclist are swept into this stirring ride to experience one of the worlds greatest cities untethered from fear of riding with traffic, stopping at lights and carrying food. 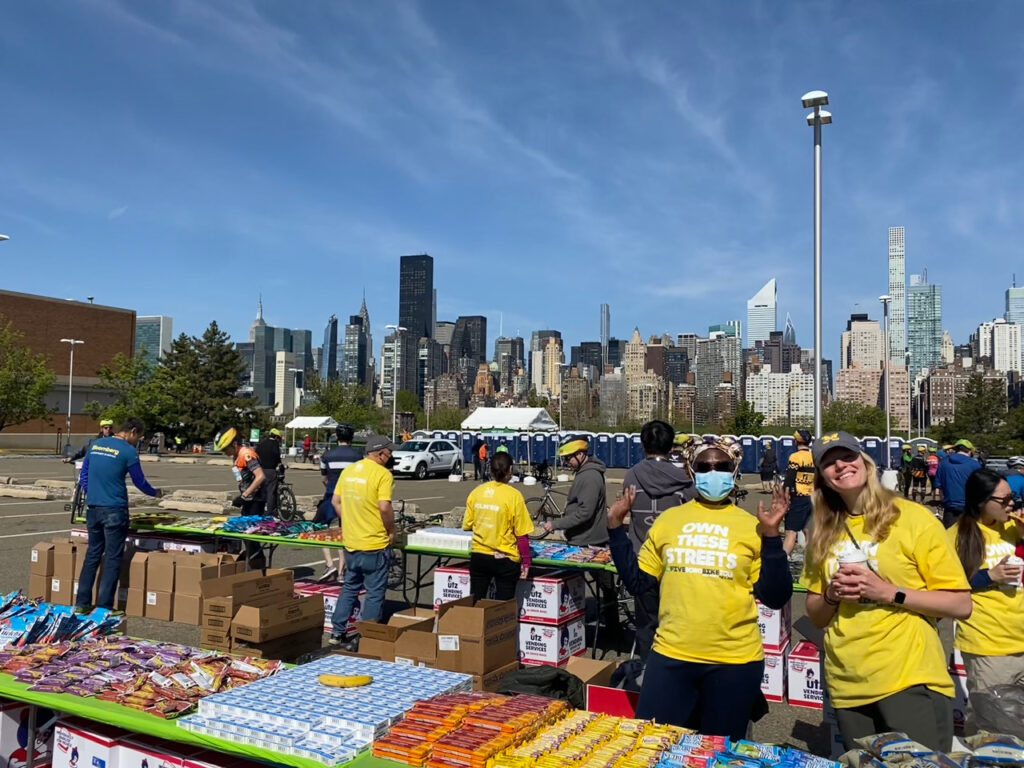 The Five Boro Bike Ride takes great vision and leadership. It started in 1977 and said current leader, President and CEO of Bike New York, Kenneth J. Podziba, “I envision a world without cars, this is a glimpse of that dream.” Bike New York has several events and engages with the community in many ways to make cycling great in New York. Said Podziba of the feeling he hopes the ride projects, “One of diversity and inclusion of all shapes, sizes, abilities and the celebration of cycling in greatest city in world while having fun on bikes”

Forty miles of streets belong to bicyclists for one day. Even some of the great bridges and half of an interstate entice riders as they pedal through Central Park on their way to the Bronx, Queens, Brooklyn and ending on Staten Island. The only hills riders conquer send them to the apex of a bridge and many stop at the top proud of the training that powered them up. 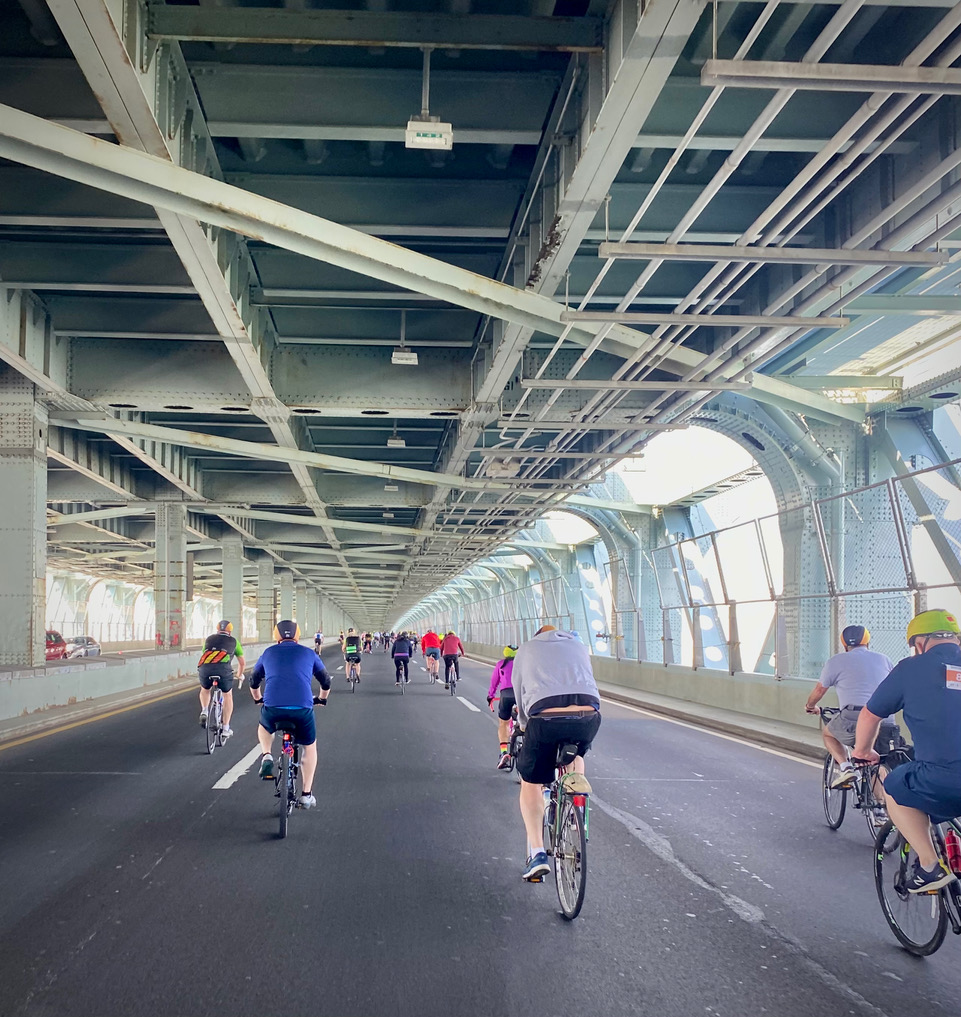 32,000 people and their bikes make for a long ribbon of action on the motor-less streets. The river of cyclists flow for hours greeted by New Yorkers enjoying a leisurely spring morning. I remember glancing up from an aid station under a bridge I had ridden over an hour earlier and watching in marvel at the cyclists still crossing over me 300 feet above. After rolling through Central Park I was greeted by a drumming group from the Bronx before pedaling through the quaintness of Queens with tulips blossoming in window boxes at the feet of trees lining the streets before hitting the shops of Brooklyn.

The magic of New York and all the boroughs rose with the sun and the chilly start became warmer with each mile as rays of sun reflected off towering windows and beams of bridges. Birds chirped and distant boats bellowed as car horns from streets away barely pierced the hum of bikes. The clickety clack of a free wheel combined with sounds of joyful people chatting while riding the empty streets in colorful kits of all shapes and sizes exuded a unified collective energy and created a rolling, peaceful world despite the vastly different backgrounds of those who rode. 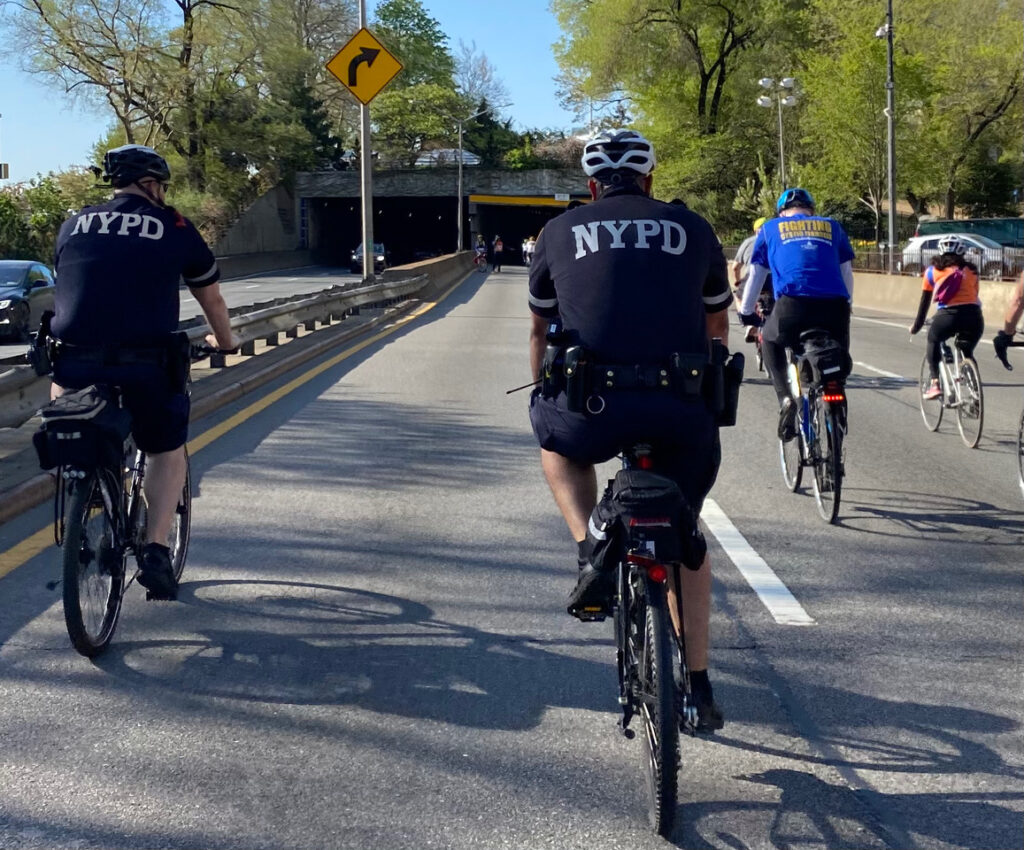 People watched and waved from porches and tiny cafe tables. With hundreds of intersections closed to cars, New York’s finest stood watch to ensure our safety. Many police officers rode as well. But it felt more like they were helping than hired to be there and they rode in pride. Like they were sharing a secret of the city they try to protect. That secret being the beauty of the life only seen and felt on a bike. The rising of life from the chaos and busyness of the Big Apple.

This ride, like New York itself is about diversity. Diversity of types of bikes, types of people and the places they come from all riding together. Never have I seen such a diverse group of people. On or off bikes. Bike New York is about, to me anyways, celebrating everything this city embraces and the pleasure of riding a bike. Here judgement does not seem to exist.  Back home in Colorado, biking hasn’t matured yet like what I saw on this ride or even this city. Most organized rides reflect a fairly small percentage of population. You rarely see people on clunkers or city bikes mingling with those on multi-thousand dollar road bikes, especially on a ride of 40 miles. That’s not a slam on Colorado, its a reflection on the popularity of biking in a place not associated with open road cycling. Most cyclists in the city seem to ride for transportation. The number of e-bikes in New York is staggering. It feels like the days of the gas powered mopeds often seen in large cities are numbered. E-bikes and scooters move people and cargo all over. 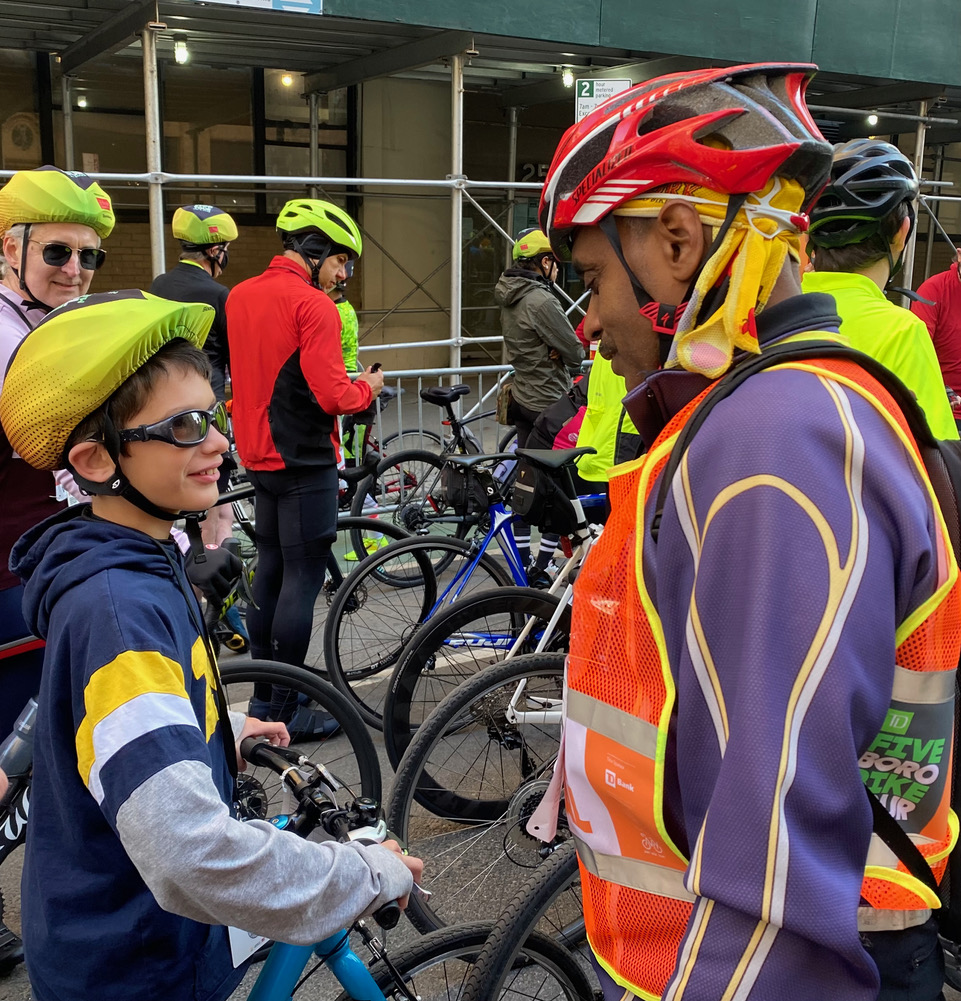 Said Dave Edwards, owner of Primal a Denver based cycling apparel manufacturer and a major sponsor of the ride, “I love everything about this ride and in particular how it brings everyone together from all walks of life for the most unique one day riding experience there is.”

It’s clear people mark this annual event on their calendars. Some take many hours to complete the ride and gather at the frequent, well stocked aid stations for photos and camaraderie. The hills of the bridges challenge them and many remarked on their attempt to conquer them without stopping. Countless groups with special jerseys or things like tall sunflowers stuck to their helmets roll by. I asked “a sunflower” why the flower. I expected some unforgettable story and they said it was simply to keep track of each other. Yet I met a man riding for cancer awareness and he wanted a few minutes to collect himself to explain the reason and got a bit teary eyed.

People rode with 32,000 reasons. Each with their own story but not all on their own, unique bike. I rented my bike along with over 4,000 other people. The logistics in place to make this ride accessible and safe staggered me. Even special ferries returned riders to Manhattan from the finish on Staten Island. Aid stations stocked with more than ample snacks and liquids funneled riders through like a swift moving assembly line that once filled buildings we passed. 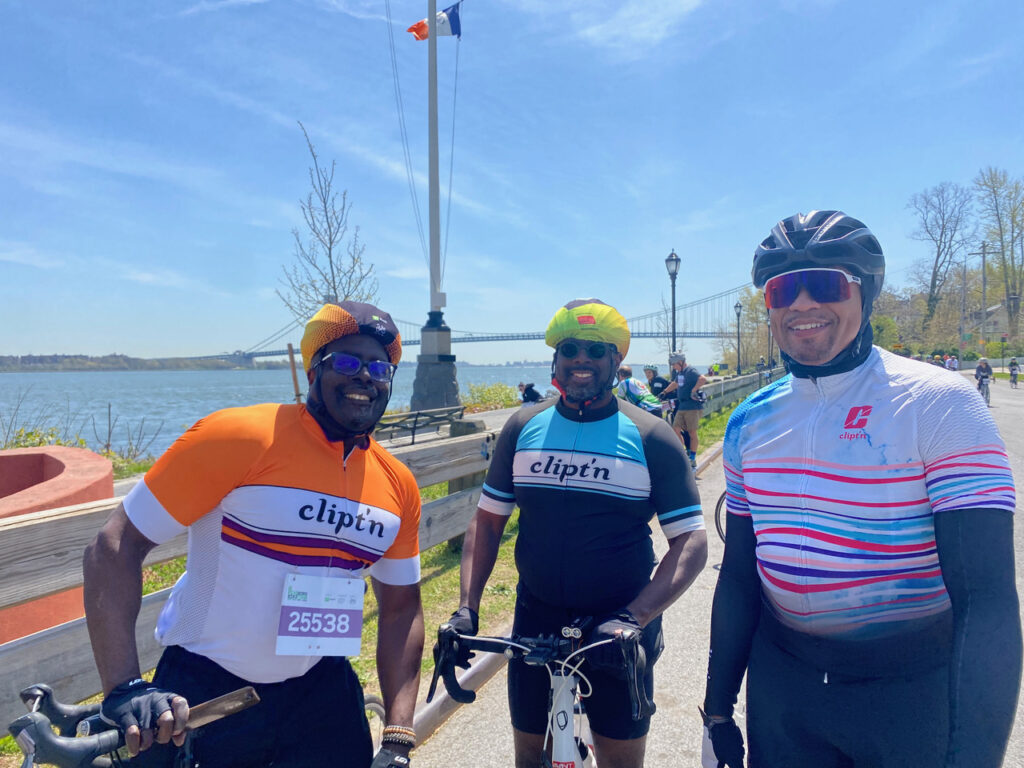 The old New York snuck through the facade of the modern. The grand bridges, quaint churches and renovated (and some not) factories and warehouses were surrounded by neighborhoods of older flats and houses nestled close and most pridefully maintained. The neighborhoods were separated by small shopping districts bustling with pedestrians and others waving us on and waiting for a slight break to cross the street.

It took a long time for the ribbon to wind through those 40 miles of unbroken freedom. On Staten Island a massive festival with music, food and beer greeted everyone at the end.

But more than that, for me at least, the finish only stopped me from riding but it propelled me to realize the future of cycling is good. It’s diverse and can live strongly when given a chance. Given some room and made safe for all to enjoy….