Nordic Skiing: The “Other” Sport That Cyclists Love

For many cyclists, nordic skiing is their “other” sport; the off-season sport that helps them to prepare for cycling season.

This week, we take a closer look at cyclists who change it up in the winter months and exchange the two wheels for a pair of skinny skis.

In addition to similar physical and mental health benefits, nordic skiing and cycling share several parallels. For example, like cycling, nordic skiing appeals to a diverse audience for a variety of reasons. While some have done it for several years, for others it is a recent discovery.

From multi-sport athletes such as Rebecca Furuta and 303 Ambassador Sasha Underwood who enjoy the challenge and thrill of competition, to recreational nordic skiers Paul Gallaher and Sylvia Bailey, nordic skiing offers something for cyclists of all ages and abilities.

You don’t have to ride your indoor trainer to stay in cycling shape during the winter months. Instead, consider cross training and doing an entirely different sport altogether.

Cross training builds core stability, power, improves cardio, and strength. One of the best winter sports for cyclists to do is nordic skiing; just ask pro cyclists- past and present.

An avid nordic skier, cycling legend Greg LeMond once claimed,”If you ski hard and then get on the trainer two to three times per week for an hour each time, you’ll retain much of your cycling fitness in the winter.”

Both LeMond and Jumbo-Visma’s Sepp Kuss (who recently placed second in a 10 km nordic skiing race in Sant Julià de Lòria, Andorra) were both recreational skiers prior to becoming pro cyclist 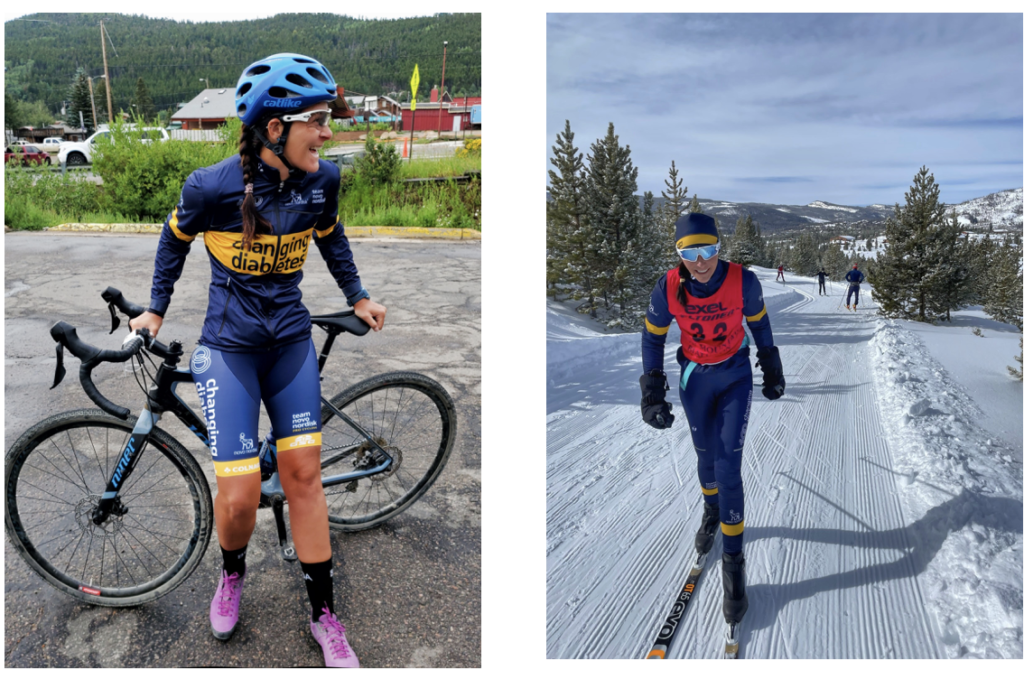 Rebecca Furuta, a cyclist with Team Novo Nordisk, attributes a large part of her long cycling career to being a multi-sport athlete.

“I’m lucky that my team is just as eager to promote my running, nordic skiing, and other outdoor activities as they are to raise my profile on the bike,” she said.

While most of her athletic career has been spent cycling, she is quick to point out that, “…in truth, I’m really just a solar-powered human.”

Nature makes the best gym.
Said Furuta, “We live in a beautiful state with a great climate and endless access to outdoor recreation. I can’t be happy sitting on a trainer, spinning circles to nowhere. I need to be outside, in the world, with all the experiences it brings,” she explained.

Earlier this winter, she and two other cyclist friends decided to compete in a nordic ski race. It turned out to be a brand new, fun-packed adventure. She’s been signing up for races ever since.

“Competition always appeals to me and keeps me motivated to train hard and measure improvements over time. It’s always good to find new opportunities to challenge myself, and I’m glad I am surrounded by people who push me in that direction,” she finished 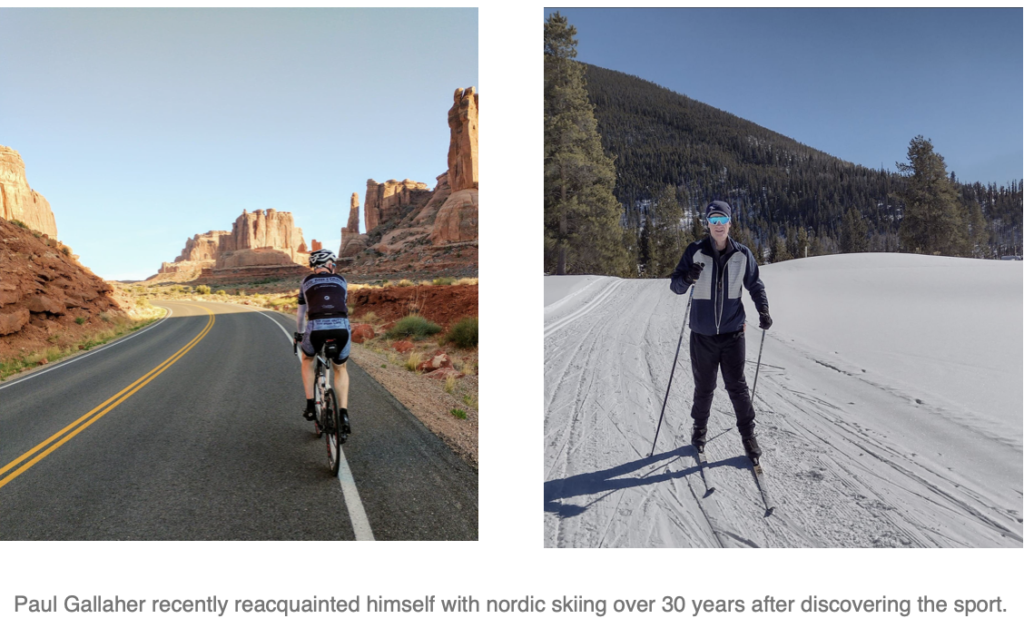 For Paul Gallaher, one of the main reasons he is a recreational nordic skier is for the sport’s well documented physical benefits; particularly for improving his cardiovascular fitness. “Nordic skiing helps my overall cardiovascular training by increasing my cardiac output and oxygen carrying capacity,” he explained.

“Although climbs are much slower than cycling, I am still able to get my heart rate into the same zone as I would if were I doing a hill climb on my bike,” Gallaher added. A nurse by trade (it’s his second career) in Colorado’s ski country, Gallaher extols the benefits of nordic skiing; especially for cyclists.

He said that he appreciates nordic skiing for helping to improve balance, muscle strength, and endurance. “Nordic skiing is incredibly effective because it uses a large percentage of muscle mass. Additionally, its low-impact nature reduces impact loading on joints,” he stated.

Gallaher was first introduced to nordic skiing during the late 1980s when he was in college, but he had only recently picked it up again last year while enjoying semi-retirement. During his time as an Air Force navigator, Gallaher didn’t always live in places where conditions were ideal to ski (think Florida). Even in Alaska, he could only ski during his lunch break if he wanted to ski in daylight.

Said Gallaher, “Thankfully, nordic skiing came back to me last year pretty quickly. I’m grateful to have the opportunity to do this on a regular basis.” 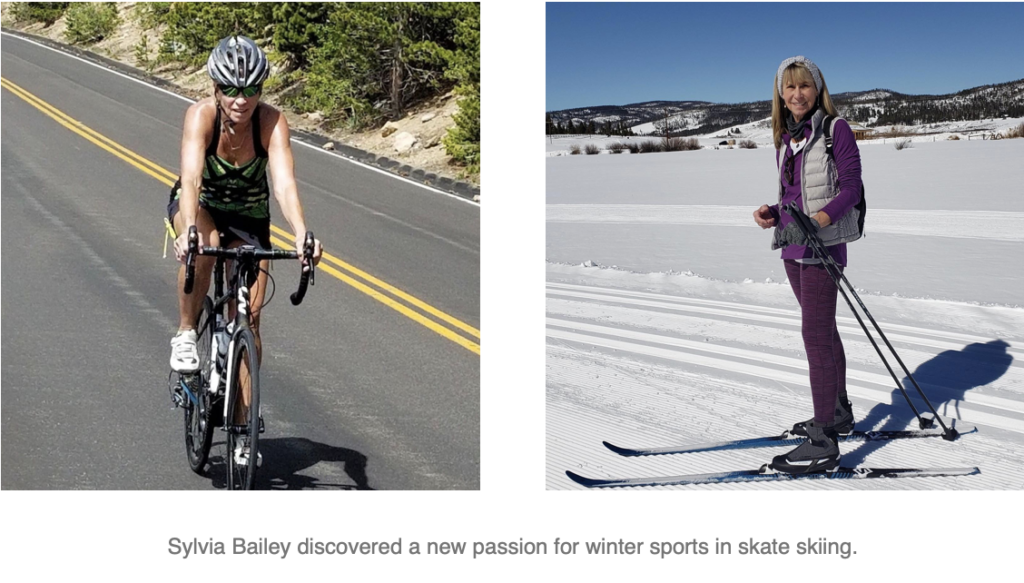 Sylvia Bailey discovered skate skiing in 2019 and has loved it ever since. “Nordic skiing is a fantastic way to enjoy the beauty and serenity of the mountains while getting a great workout,” she maintained.

For an active person who finds solace and spiritual renewal in the mountains, nordic skiing offers the escape she needs. Additionally, nordic skiing gives her a mental and physical break from the bike. Interestingly, there was a time when she hated winter, she explained, due to its weather making it very difficult to ride her bike outdoors on a regular basis.

She later realized that nordic skiing was one of the few outdoor recreational activities that she’d be able to enjoy during winter. “In 2019 I tried skate skiing for the first time and fell in love with it. Even though I was only able to skate ski a few times that year, I was hooked and the following season I bought my own equipment and went at least once a week,” Bailey said.

During Winter 2019/20, she was on a roll with skate skiing (she had gone a dozen or more times), when it came to an abrupt halt on March 15, 2020, when the global pandemic caused ski areas to cease operations.

Fast forward to 2022, and unfortunately, due to recent surgery, she’s only been able to skate ski a few times this season. However, she remains hopeful that the snow will last into April when she can participate again and find quiet moments of renewal and appreciation for her natural surroundings. 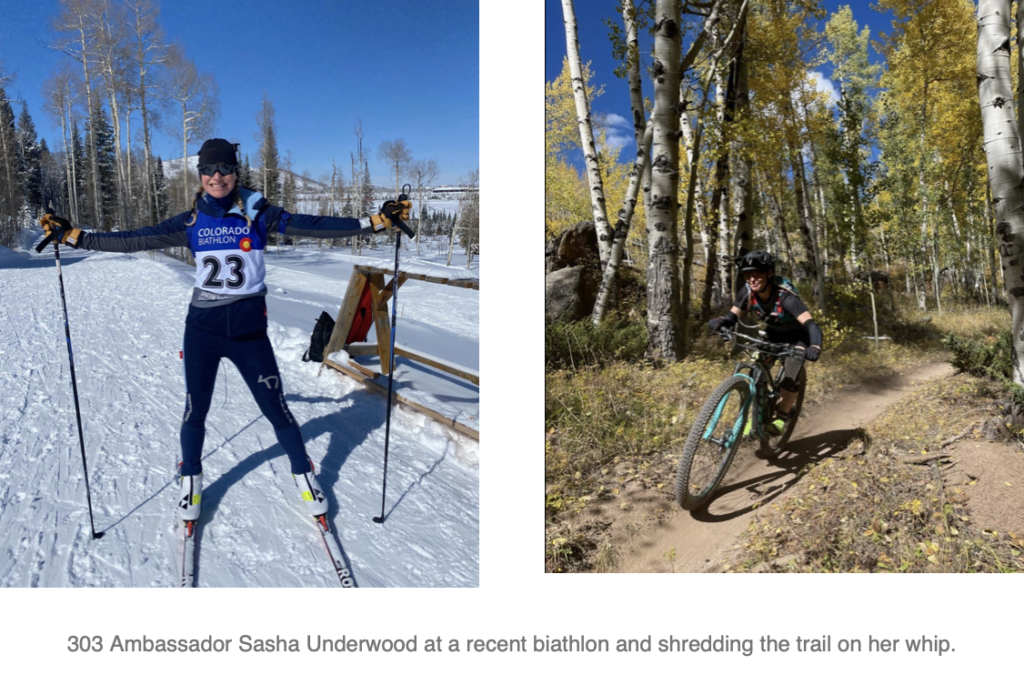 “I primarily mountain bike and I love being outside in the mountains! So when there isn’t dry dirt to ride on, nordic skiing allows me to still get my mountain play time in,” she enthused.

In addition to nourishing her wanderlust, there are practical reasons too.

For a mountain bikers where balance is a key skill, there are other direct benefits of nordic skiing. Specifically, increasing a kinesthetic sense (body’s ability to perceive location in space), and improving visual acuity (ability to distinguish shapes and details at a given distance).

Underwood added, “The benefit of keeping up my cardio endurance and core/ leg strength is a great bonus.” A cyclist for 13 years, she began skate skiing about six years ago when a friend introduced her to the sport of summer biathlon (mountain biking and shooting rifles).

Whether nordic skiing or mountain biking, be assured that this mountain maiden always picks up when the mountains call.

Where can I nordic ski?

While there are some non-resort places to nordic ski, most nordic skiers recreate or train at designated nordic centers; many of which are found in Summit County, Grand County (Snow Mountain Ranch, Devils Thumb, Grand Lake)  or at Eldora near Boulder.

The Facebook group, Summit Society of Cross Country Skiers (SSXCS) is a resource that provides an engaging community and intel about places to ski.