by Adam Ruggiero on GearJunkie.com
The Israeli special forces have long been the envy of hand-to-hand combat fighters. One Minneapolis studio modified its martial art, Krav Maga, into the first and only defense program specifically for cyclists. 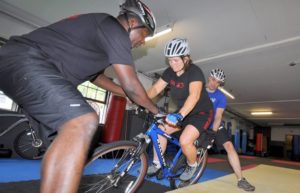 It’s a Sunday night in the city. I’m on my bike. A shout from the left; someone is coming at me.

A large man rushes me, hollering obscenities—he’s got a knife. Another attacker jumps out ahead and shoves me to the ground. Suddenly assailants are pounding me from all angles. Something snaps inside me and I throw a volley of punches and kicks that connect. I’m screaming my own vulgar threats, trying desperately to get away.

Krav Maga On Bikes
Thankfully I was spared the trauma of an actual attack. The entire scenario was in a controlled environment: Krav Maga Minneapolis, a studio near the heart of the city. 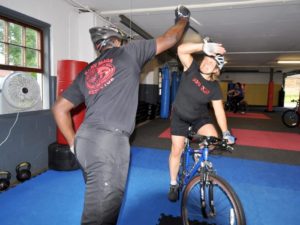 This studio is the only one in the world with a defense program catered specifically to cyclists. The Krav Maga For Cyclists workshop, a three-hour hands-on tutorial on principles and special techniques, was a response to a rash of attacks against bikers in the city throughout the early 2000s.

Read the full article on GearJunkie.com