Bikes have been a part of my life for as long as I can remember. I started riding around the age of 3 or 4 years old. My father did not believe in training wheels. He explained to me over 30 years ago that training wheels would not allow me to balance on my own (and would also slow me down) and thus be a hindrance while learning to ride a bike. In hind-sight, I think he was right. After a day or two of crashes and him running beside my bike holding on – I was finally able ride independently. I have memories of riding with friends – me on my two wheel bike, and them on their bike with training wheels. I won every race I had with my friends in those early days.

It was a bike trip with my father riding the Continental Divide Mountain Bike Route (before it was even a thing to do) that I first saw Colorado. I loved the vast mountains, the friendly people and decided when it was time for me to go to physical therapy school, Colorado was at the top of my list. I completed my doctorate in physical therapy and went on to obtain a Board Certification in Sports. I have two wonderful sons, Landon (age 3) and Tucker (almost age 2). I look forward to many years ahead of riding with my family, and started both boys before their 2nd birthdays on balance bikes.

Balance bikes have gained popularity in recent years, not only in the cycling world, but among experts in pediatric neurodevelopment as well. Balance bikes offer all of the traditional benefits or cycling like; exercise, balance, spatial awareness, independence, fun and enjoyment of the outdoors but at a younger age. Development of gross motor skills is essential to normal development and becomes the foundation of athletic ability later in life. Around the age of two, toddlers are constantly working to master new skills within the confines of appropriate spatial awareness. It is generally accepted that there is a close link between motor abilities and spatial cognition – and as coordination and motor skills increase at a younger age, so does social-emotional development. 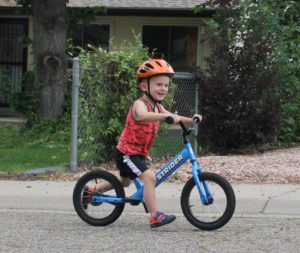 By allowing a young toddler to initially walk straddling their bike, with their feet firmly on the ground, they are able to focus on one thing; control of the bike in their surroundings. Research has shown that regardless of age, learning to steer in the direction of lean at varying velocities is essential to learning to ride a bike. As a toddler’s comfort level and speed increase slightly, they can build on their spatial control, as well as increase the demand on their balance systems. By the age of 22 months, my son Landon was running/striding with his bike and lifting his feet to balance down hills. Like all kids, there were still some crashes, skinned knees and tears, but not nearly as many as I endured learning with the “run and let go” approach of the past.

This past Christmas, we bought Landon a new Strider 14x bike. This is a balance bike that can be converted into a pedal bike when the child is ready. We passed his previous Strider bike on to his younger brother, with new bright green wheels and tires due to the fact Landon had ridden the bike so much in the past 18 months he had worn through the treads. These two bikes were the highlight of Christmas morning, so much so that Landon insisted on going outside to ride his new bike in the snow. Try that on a regular two wheel bike! 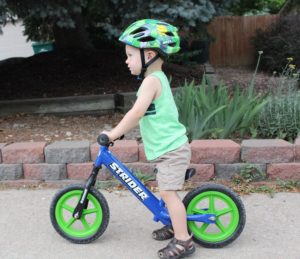 Our younger son Tucker will be two years old next month and rides his balance bike around the cul-de-sac with the other kids while Landon has been striding with me as I go for my 3-mile runs. Earlier this week we decided Landon was ready to switch to a pedal bike due to his ability to balance over long distances with his feet up on his balance bike. We worked together for a couple minutes to understand forward pedaling and backward braking with the pedals. We started on a slight downhill, and after five big strides he picked his feet up and placed them on the pedals and off he rode. He had no problem with balance, and again was able to focus on a single task – pedaling (and to a lesser degree, figuring out pedal brakes). After about 10 minutes of practice, Landon was able to cruise up and down the bike path by our house and he looked like he had been riding for months. He has a pride for his new skill and independence and has insisted we go out riding every day, often 2-3x per day, since switching to pedals.

Having watched a number of nieces, nephews and friends transition from balance bikes or training wheel bikes to a traditional two wheel bike, it seems consistent that those kids that rode a balance bike prior to the transition had an easier time. Looks like my old man might have been on to something a long, long time ago when teaching me. I am excited to watch both boys continue to develop and learn new skills on their bikes that will set them up for a lifetime of riding.

The next stop for our two boys will be the 2018 Strider Cup World Championships July 21 in Boulder. This looks to be a family-friendly event with races for kids aged 6 years old and younger, demos on the 14x and more.  We’re excited to have a fun event like this for the kids right in our backyard!

Strider World Cup Information and Registration can be found HERE 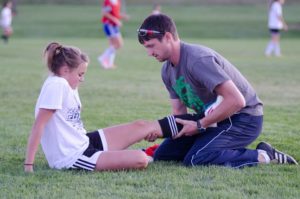 Justin Dudley founded Cascade Sports Injury Prevention and Physical Therapy LLC in 2011 to address the growing need to protect against non-contact injuries while maximizing the athlete’s opportunity to participate in the sports they love. Justin grew up in Bellingham, Washington where he played soccer locally as well as for the Olympic Development Program for Washington State. He earned a BS degree in Kinesiology from Simon Fraser Univesity in Vancouver, British Columbia and then went on to earn a Doctorate of Physical Therapy from the University of Colorado Denver. Justin brings extensive sports experience to Cascade Sports. Justin was a 2-time NAIA Soccer All-American in college and was set to play professionally when an injury forced him to switch his focus to coaching. He has coached at the youth, collegiate, and semi-professional levels. Since 2003 Justin has been providing trainings, injury prevention screenings and sports performance for athletes from a number of different sports including soccer, football, basketball, softball, baseball, golf, swimming, track & field, tennis and cycling. Justin is Board Certified in Sports through the APTA. He is certified in Trigger Point Dry Needling. In his free time, Justin continues to play soccer, is an avid skier and hiker and enjoys backpacking in the local mountains.

One thought on “Balance Bikes: A perspective from a physical therapist and a father of two”