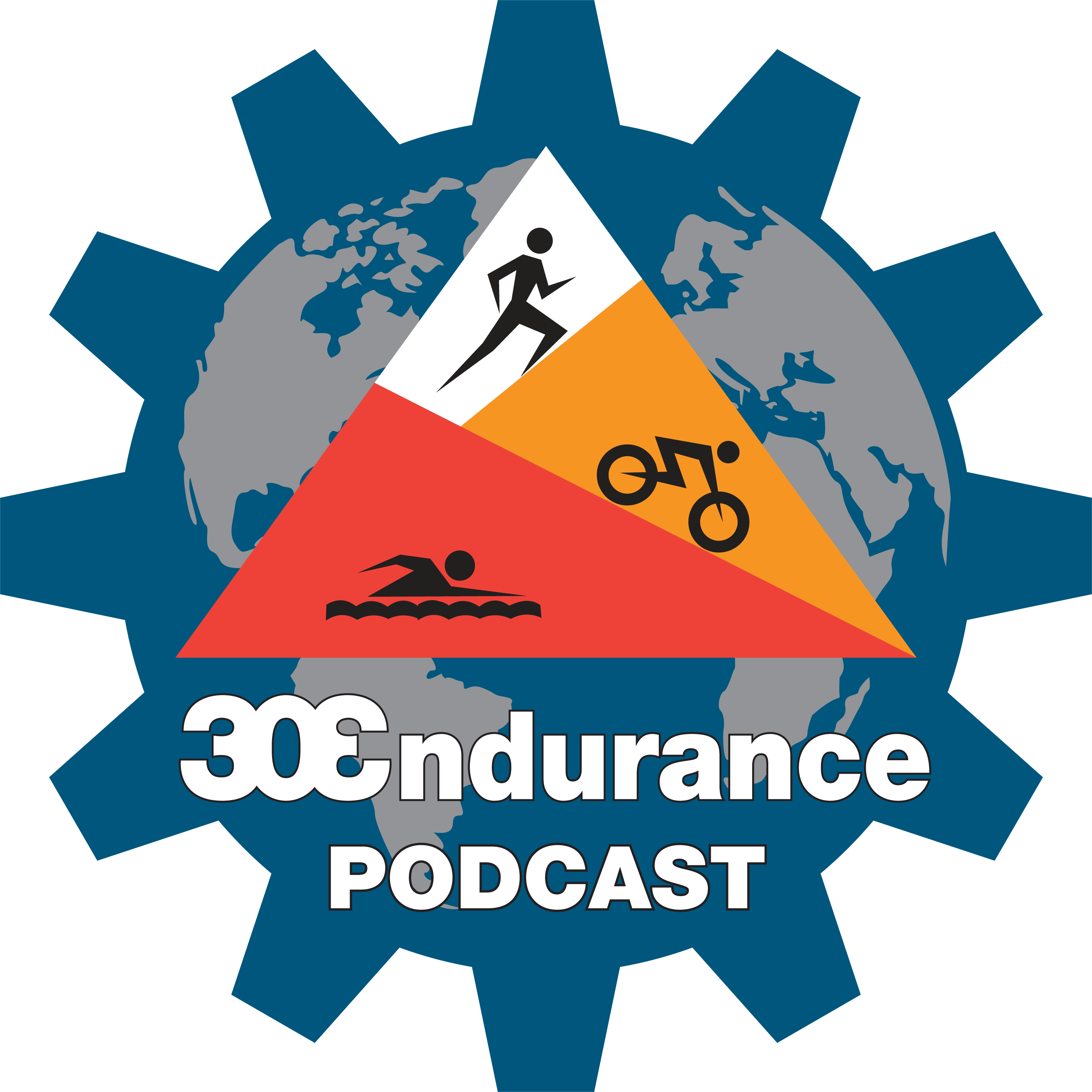 The 303Endurance Podcast mission is to is to create a global community of endurance athletes. To inspire participation in endurance sports by connecting you to coaches, experts and professional athletes.

Big announcements this week from IRONMAN and Tour de France. We’ve been talking for weeks about the 2 Day IMWC dilemma. IM’s answer- 2 different locations, 1 month apart and on opposite sides of the globe for women and men. We knew the women were racing in Kona in October ’23. It looks like the men will be racing in Nice France in September. We’ll talk about this in the news and more.

Generation UCAN has a full line of nutrition products to fuel your sport. UCAN uses SuperStarch instead of simple sugars and stimulants to fuel athletes.  UCAN keeps blood sugar steady compared to the energy spikes and crashes of sugar-based products. UCAN also has hydration products focused on giving you the sodium you need when hydrating, including several clean and light flavors. Steady energy equals sustained performance and a faster finish line!

Use UCAN in your training and racing to fuel the healthy way, finish stronger and recover more quickly!  Use the code 303UCAN for 20% off atucan.co/discount/303UCAN/ or ucan.co

Buddy Insurance gives you peace of mind to enjoy your training and racing to the fullest. Buddy’s mission is simple, to help people fearlessly enjoy an active and outdoor lifestyle.

Get on-demand accident insurance just in case the unexpected happens. Buddy ensures you have cash for bills fast.  Go to buddyinsurance.com and create an account.  There’s no commitment or charge to create one.  Once you have an account created, it’s a snap to open your phone and in a couple clicks have coverage for the day.  Check it out!

TAMPA, Fla. (Nov. 30, 2022) /ENDURANCE SPORTSWIRE/ – Following the first-ever two-day IRONMAN World Championship and a continued commitment to providing women and men their own dedicated day of racing, IRONMAN announced today that the 2023 VinFast IRONMAN® World Championship triathlon will move forward with two different host venues. To ensure that both professional and amateur women and men have a focused IRONMAN World Championship race experience, the women will race in Kailua-Kona, Hawai`i on October 14, 2023, with the men’s race date and location outside of Hawai`i currently being evaluated and expected to be announced in January 2023. For 2024, the men and women would exchange locations.

The 2022 VinFast IRONMAN World Championship was held this past October in Kailua-Kona, Hawai`i over two days for the first time in the history of the event, showcasing the very best women and men in the sport while giving both their deserved spotlight. With the future dual host locations and separation of race weeks, the women’s and men’s races will each garner further attention with all eyes focused on the race week activities and lead up to their respective IRONMAN World Championship race days.

While the 2022 VinFast IRONMAN World Championship two-day format was a success in many areas and the two-day format in Kailua-Kona for 2023 had already been announced, IRONMAN and the County of Hawai’i concluded together that the impact of two days of racing in Kona is not currently in the best interest of the local community.

“We are reinforcing our commitment for a dedicated world championship race experience for women and men to each receive an exclusive spotlight on their race. Hawai`i is in our DNA and we look forward to the first-ever exclusively women’s world championship race week in Kona. At the same time, we are looking forward to announcing a co-host location for the men’s race that will be worthy of an IRONMAN World Championship and will capture the imagination of our athletes and fans,” said Andrew Messick, President & Chief Executive Officer for The IRONMAN Group.

Hawai`i is the proud birthplace of IRONMAN and despite not being able to undertake a two-day world championship event at this time, it will continue to be an important part in the shared history of IRONMAN, with Kona continuing as a co-host of the IRONMAN World Championship.

“Hawai`i County has long enjoyed partnering with IRONMAN and this year’s epic races were another example of world-class athletic competition held on the traditional Kona-Kohala world championship course,” said Hawai`i County Mayor Mitch Roth. We learned, however, that more than one race day during IRONMAN week is too many for the community to manage. We are pleased that IRONMAN plans to return to Kailua-Kona as a co-host of the 2023 VinFast IRONMAN World Championship and look forward to more exciting events in the future.”

With this major move to ensure dedicated IRONMAN World Championship racing for both women’s and men’s fields, the qualifying cycle and slot allocations will be slightly adjusted. Allocations may be viewed here, www.ironman.com/im-world-championship-2023-slot with further adjustments to occur in line with the Men’s Championship race location announcement, expected to occur in January. Additionally, all athletes who have previously qualified and registered for the 2023 VinFast IRONMAN World Championship will be contacted directly with additional information.

For the first time in race history, the Tour de France will not conclude in Paris in 2024. That’s according to La Gazzetta dello Sport, which reports that Nice will be the host of the final stage in two years.

Why? With the Olympic Games set for Paris from late July into mid-August, officials do not want the logistical and security issues overlapping between the Games and the Tour.

The final stage of the Tour has always been in Paris (or in nearby suburbs), and since 1975 the final stage has ended on the Champs-Élysées.

The 2024 edition of the Tour is expected to start in Italy for the first time, with stages in Tuscany and the Piemonte regions before dipping into France.

The race would then embark on its traditional “grande boucle” around France, but instead of heading to Paris, it will loop back toward Nice for the finale.

Nice recently hosted the “grand départ” of the 2020 edition of the Tour that was rescheduled for September in the wake of the coronavirus pandemic.

Details of the 2023 edition are already revealed, with the race starting in Spain’s Basque Country, and the final stage, as always, in Paris.

Chloé Dygert has undergone surgery to treat supraventricular tachycardia (SVT), a condition which causes episodes where the heart beats much faster than usual.

The North American rider revealed the information in a post on Instagram accompanied by video clips of herself lying in a hospital bed.

“My SVT was annoying but not life-threatening, (as long as I stopped immediately if I was training),” Dygert, who is set to embark on her third season with Canyon-Sram next year, wrote.

“My most recent episode happened while I was out on an easy basic endurance ride, my heart rate peaked at 219, then sat at 205 for five minutes and 195 for another ten minutes.

“It would jump between 180 to 205 in the remainder of the episode lasting 35 minutes. I stopped and sat on the side of the road to wait for my heart rate to slow back down below 150.”

Dygert explained that she had been suffering from the condition for nearly a decade, though the frequency of the SVT episodes had increased in recent months.

“It started for the first time back in 2015, only happening once or twice a year until this year,” she wrote of the condition, which is rarely life-threatening but may cause a cardiac arrest or unconsciousness.

“But just the past two months it has triggered five times. My fear is having one during a race and needing to stop so we made the decision to go in and get it fixed with the frequency increase.”

Dygert has endured a hard two years after suffering a brutal crash during the Road World Championships time trial in 2020. She was away from racing for nine months following the devastating knee injury suffered after colliding with a guard rail during the Imola time trial.

Last year she took part in the Olympic Games road race and time trial, though her 2022 season was once again ruined thanks to a bout of the Epstein-Barr virus.

Her SVT surgery seems to only be a minor blip in her recovery, however, as Dygert revealed that she is already back on the bike and training.

“I was awake and lightly sedated during the procedure,” she wrote. “Definitely one of the most unique kinds of pains I’ve ever felt. In the recovery, I wasn’t allowed to move for 4 hours, giving the artery time to heal from the catheter ablation. I was back on my bike within 5 days after the procedure with only one minor hiccup happening on day 5.”

How many different schools are represented on the East Team?

Describe the growth of the team over the years.

The team was founded in 2010 by Steve Bussey, an employee in the District’s Office of Technology. Over the next ten years, the team grew and sometimes shrank before reaching a high point of over 50 riders. However, the team shrank significantly during the pandemic and subsequent cancellation of the racing season. Coming out of the pandemic, we expected the team to be approximately 30 riders, but were pleasantly surprised to field 42 riders and racers by the end of the season. Many are girls and/or high school seniors who joined the team for the first time.

Most of our riders have some experience riding trails and some already have experience racing mountain, road, or cyclocross. However, the majority of our riders have never raced before joining the team. More interestingly, being a city-based team, some of our new team members have never owned or ridden a mountain bike before, We love attracting those new to the sport. So, while the learning curve can be steep, it is incredibly rewarding. Some of our favorite stories involve our new riders and the improvement they see over the course of a season.

Favorite practice rides and how often do they practice?

We practice Monday and Wednesday evenings on the Front Range trails. To avoid the heat in the early part of the season, Three Sisters and Lair ‘O The Bear are favorites. As the days get shorter and cooler, we frequent Green Mtn, North Table, Chimney Gulch, and Erie Bike Park. On non-race weekends, we try to organize rides a little further afield at places like Buffalo Creek or Trestle Bike Park. The biggest hurdle for the team is getting to the trails. Every practice will have a drive 30 minutes or more just to get to the trails. We rely on riders and parents to organize transportation for those unable to drive themselves. It’s not easy.

The Preseason Project® is a triathlon research initiative that helps TriDot quantify and enhance the performance gains that TriDot’s Optimized Training™ delivers over training alternatives.

Submit this 2-minute app to qualify for 2 FREE months of optimized triathlon training with the TriDot Mark Allen Edition.

You qualify for the FREE training if you meet the following criteria:

* Applications are reviewed and accepted on a first-come basis and must be fully completed to be considered.

Video of the week:

Thanks again for listening in this week.  Please be sure to follow us @303endurance and of course go to iTunes and give us a rating and a comment.  We’d really appreciate it!