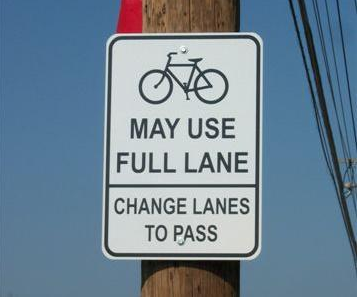 The US city of Columbus, Ohio is to phase out yellow “Share the Road” signs in favour of white ones reading “Bikes May Use Full Lane.” The city believes that the move will better get across the message that cyclists are entitled to ride in the centre of the lane. 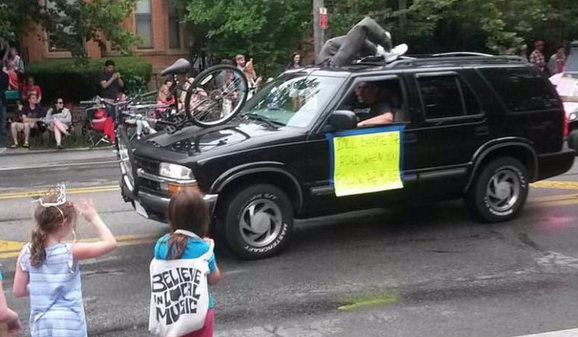 Columbus does not necessarily have a reputation for being a trailblazer when it comes to its residents’ attitudes to cycling. Earlier this year, organisers of a Fourth of July parade were criticised after allowing a vehicle to take part with a bicycle attached to the bonnet, a pair of legs sticking out through the sunroof, and a message on the door that read, “I’ll share the road when you follow the rules.”

However, one local said that particular move had simply been ‘kickback’ because the city has a strong cycling community and was at that time in the process of building a number of new cycle lanes and paths.

them as being aimed at cyclists, telling them that they need to “share the road” with drivers by staying as close to the kerb as possible.

The city’s Bicycle Coordinator, Scott Ulrich, told Columbus Underground that the different shape and colour of the Bikes May Use Full Lane signs also gave a message to drivers.

“A yellow diamond sign is for warning drivers of potentially hazardous road conditions, whereas the Bikes May Use Full Lane signs are white rectangles, which are regulatory signs that control lane use. We believe it is more appropriate to treat bicyclists less like potential hazards and more like the legal road users that they are, and to remind other road users of that fact.”

In July, signs telling drivers “Cyclists Can Take the Lane – Stop Honking” were installed on an Ottawa road. Earlier signage asking drivers to “share the road” didn’t work, with drivers honking and harassing cyclists until they moved over…