How big is the e-bike trend?

It is big enough that the UCI has decided to include an electric mountain bike event in the 2019 World Mountain Bike Championships, awarding a rainbow jersey to the world’s best e-MTB rider. 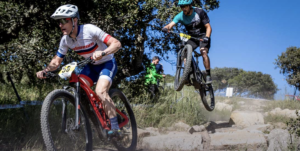 Given the proliferation of e-bikes in the market, it isn’t shocking that the UCI would get involved. Tradeshows like Eurobike and Interbike are teeming with e-bike companies. Races like the Sea Otter Classic offer cash prizes to e-MTB race winners. And in Europe, professional e-MTB racing is a viable alternative to “acoustic” racing.

The first world e-MTB championships will be held in Mont-Sainte-Anne, Canada, August 21-September 1, along with the traditional mountain bike disciplines.

Also in the announcement, UCI clarified rules surrounding the use of prototype equipment in pro racing.

Over the years, many teams have skirted the UCI’s rule that any equipment ridden in competition must be commercially available. For instance, Team GB’s 2012 track bikes were prototypes that were supposedly available for purchase, but the price and how to order one was vague.