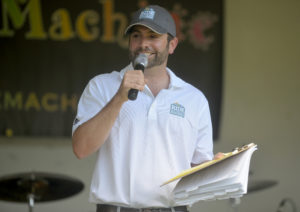 Denver, CO. — Chandler Smith, long-time Director of Ride The Rockies, has announced his departure from the organization, effective October 31st, after ten years of employment. At the conclusion of his tenure, Smith will have managed fourteen cycling events for The Denver Post Community Foundation while also founding the Colorado Bicycle Event Coalition in 2008. Smith is leaving to focus on several new endeavors that include BikeState38, Colorado Bike Expo and a role as Race Director of the Mavic Haute Route Rockies. Smith will continue supporting The Denver Post Community Foundation as a consultant over the next several months.

“The last ten years have been nothing short of amazing,” Smith said. “It’s been an honor to lead Ride The Rockies and Pedal The Plains while showcasing our beautiful state. I’m grateful to all those who have contributed to the success of both events and for the support of our dedicated staff, volunteers and community partners. The future is bright for cycling in Colorado!”

Established in 2011 and owned by OC Sport, Haute Route is an international cycling event that draws riders from over 50 countries. OC Sport, also known for its events in professional sailing and running, recently announced Colorado will be the home of their first U.S. stage race. The Mavic Haute Route Rockies is scheduled to take place from June 24 – 30, 2017 and is the first U.S. edition of the world’s highest, toughest and most prestigious amateur cycling series.

The first event will include an international peloton of 600 amateur riders on a 550 mile course between Boulder and Colorado Springs over seven timed and ranked stages, featuring more than 52,500 ft. (16,000 m) of climbing. The event builds on the success of Haute Route editions in the French Alps, Pyrenees and the Dolomites Swiss Alps attracting 1,500 riders from around the world each year. Competitors in the Rockies will receive pro-level support from title partner Mavic.

“Chandler will be missed,” said Tracy Ulmer, Executive Director of The Denver Post Community Foundation. “His leadership has been steady and innovative throughout his time and the quality and professionalism that our riders expect each year is truly an extension of his involvement.”

Throughout his time overseeing Ride The Rockies, Smith continued the tradition of not repeating a single route over the course of 30 years, all while successfully navigating forest fires and late-season blizzards. He is also credited with raising the profile of The Denver Post Community Foundation by placing a stronger emphasis on the charitable aspects of the ride. In collaboration with the Office of Governor John Hickenlooper, Office of Economic Development & International Trade and OnSight Public Affairs, he also created The Denver Post Pedal The Plains Bicycle Tour, now in its fifth year.

The Denver Post Community Foundation has opened up a public search for a new Tour Director and is currently accepting resumes. Interviews are scheduled to take place in the month of August. To learn more, contact Tracy Ulmer at tulmer@denverpost.com.