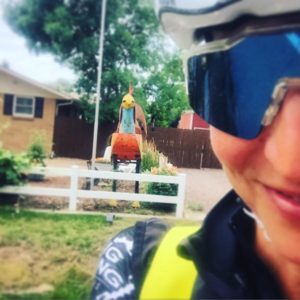 I ran errands by bike today – first, to the fed ex store in Old Town Arvada. There, the woman behind the counter went on and on about how she couldn’t believe I was picking up a client’s medical records by bike, how cool it was that I’d come “all the way” from Golden, and “oh hey by the way do you know there’s a great bike path just down the road; it’ll take you right back…” She says. I feel like the man behind me in line is getting agitated as she continues to want to talk about bike paths and such… but to my surprise once I wrap up and he moves to the counter, he begins to engage me about the bike path also and then moves on to talking about Mt Falcon on his MTB and it was all just lovely-3 strangers communicating about bikes.

I tried that new bike path and while it took me longer to get back, it was enjoyable- full of new sights and sounds.

Errand #2 took me to an ATM inside a grocery store. I rolled my bike in and rested it next to me. A store employee walked up to me (I assumed, to ask me to take the bike outside), but instead asked, “Is it really light, can I pick it up?”… “Sure,” I exclaim, “she’s about 14 lbs outta the box!” He then proceeds to tell me a story about how he got his butt handed to him by his buddies because his bike weighed about 30 lbs and theirs were light like mine. He said he “saw the light” and ran to WRC to get himself a new, lighter bike. So we had a good chuckle about that.

Errand #3 was to get toothpaste at Walgreens. I rolled my bike inside quick, grabbed the one item and went to check out. The lady at the register began talking about the weather being nice and cool today, making it a great day for a ride; she commented how great it was I didn’t need a plastic bag (as I had my trusty backpack) and hoped I stayed dry. The woman behind me in line was watching and listening with curiosity – I could tell she was intrigued. We forget sometimes walking around inside a store, wearing a kit, helmet, and those clicky shoes, how people notice and maybe- just maybe -we inspire them to try it.

This- is the magic of bikes. #RideMoreDriveLess