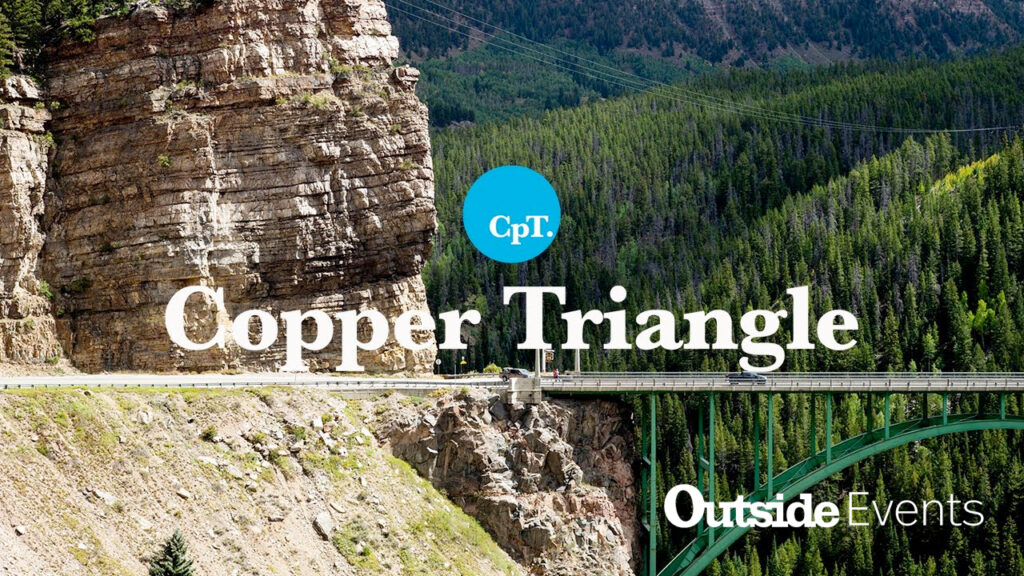 Now in its 16th year, the 79-mile loop travels from Copper Mountain to Leadville to  Minturn over Vail Pass and back to Copper Mountain. The Copper Triangle is the quintessential Colorado cycling challenge. The route traverses some of Colorado’s most beautiful alpine scenery and climbs historic Fremont Pass, Tennessee Pass and Vail Pass. While it is not a “Century” in the traditional 100-mile sense of the word, The Copper Triangle is a worthy cycling challenge, one that gives as much as it requires of you. Oh, and it’s a fundraiser for the Davis Phinney Foundation, as well.

“This year, 2,100 riders from 41 states and the United Kingdom took the start line for this year’s Copper Triangle,” said Scott Olmsted, Senior Director of Event Operations, Outside Events. “The youngest rider was 11 years old, and the oldest was 82.”

Don’t let the climbs intimidate you, because just like the song says, “what goes up, must come down.” The downhills on The Copper Triangle are just a delight for the senses.

The ride passes historic Camp Hale, where US Army soldiers of the 10th Mountain Division trained during WWII, the weathered rocks of Battle Mountain and over the historic Red Cliff Bridge. The iconic landmarks and the stunning scenery make The Copper Triangle special, but at it is core it is a bike ride. A ride that will challenge you with 6,500 vertical feet of climbing over the distance of the ride.

With the unpredictable nature of alpine weather in the afternoon, luck favors the rider willing to get up early and get on the road. I’m not gonna’ candy coat it, starting a 79-mile bike ride at 6:30 in the morning when the temperature is a chilly 44 degrees is not easy. And there is always a balance to be struck, wearing enough clothing to be comfortable at the start of The Copper Triangle, and having so much on that as the temperatures rise you don’t have enough room in your jersey pockets to stow it all.

I tend to error on the side of, “meh, I’ll be a little cold at the start. But I won’t have so much on that I’m trying to stuff a small suitcase of ‘warmers’ into my jersey pockets.”

The Copper Triangle starts in the village at Copper Mountain ski area and makes an abrupt right turn as you leave the Alpine Lot as it heads up Highway 91 to Fremont  Pass. This climb is moderate, averaging 3 percent throughout the 11-mile ascent.

Officers from The Colorado Highway Patrol did yeoman’s work keeping riders safe, by ferrying car traffic up and down the pass in caravans in the opposite lane of traffic than the riders. It’s a great comfort, especially in the low light of the early morning, to know the CHP is on patrol.

As the sun began to crest over the mountains and the mist clinging to the valley started to break up, it really is a sight to behold. Once the sun begins to shine on the riders, the pavement begins to dry and you begin to warm up. Before you know it, you will have climbed to 11,300 feet and the summit of Fremont  Pass, site of the Climax Molybdenum Mine. The largest Molybdenum mine in the world, which opened in 1915.

When you hear the term chromoly, the “moly” stands for Molybdenum. It is primarily used in making Steel, which makes it stronger and more corrosion resistant.

Next, it’s time for the first big downhill of the day. Down from the summit of Fremont  Pass and into the valley that forms the headwaters of the Arkansas River. Beautiful scenery and a speedy descent until the short climb up to Leadville. I know I’ve mentioned the iconic landmarks and the stunning scenery, but the people are also a big part of what makes The Copper Triangle quintessentially Colorado. 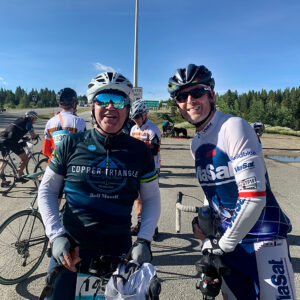 Just outside of Leadville I met two unlikely characters riding together on their first Copper Triangle. John Hilley from Nashville, Tennessee and Steve Johnston from Park City, Utah. They like myself were shedding a layer before the next climb. They’d only met this morning, but judging by the smiles and laughter, they were enjoying each other’s company on a spectacular ride far from home.

After stuffing my vest into my jersey pocket, I made the right turn onto Highway 24 and began the climb up to Tennessee Pass at 10, 424 feet. The climb averages 4 % grade, but there are some spicy 6% grades interspersed to keep things interesting.

After pulling into the parking area at the top of Tennessee Pass, I saw two riders on Cervelo’s (I’m a big Cervelo fan) next to the National Forest sign that announces the top of the pass and commemorates the 10th Mountain Division Memorial where the aid station is located. Of course, I had to say, “hello.” Turns out they were a father and son from Castle Rock, Colorado. David Archibald and his son Jonas were doing their second Copper Triangle together. 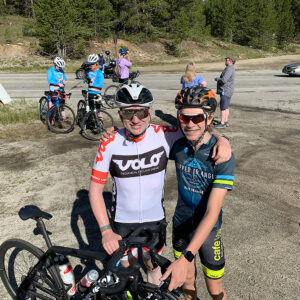 David Archibald, left, and his son Jonas at the top of Tennessee Pass. Photo: A.V. Schmit

“Spending time on the bike with my son in this beautiful place… It’s just the best,” the senior Archibald said. “Last year, he couldn’t keep up with me. This year, I can’t keep up with him. He’s gotten so strong.”

After a quick snack, it was time to put my vest back on and enjoy the downhill to Red Cliff, Colorado and the site of the historic Red Cliff Bridge. Construction began on the Red Cliff Bridge in 1939 and it was completed in 1941. It cost $372,407 to build, which is the equivalent to $5.5 million in 2020 dollars. This stark green structure is a cantilevered steel arch bridge that is 471 feet in length, with the longest span being 317 feet. It rises more than 200 feet above the Eagle River, and is one of the most iconic views on The Copper Triangle.

After taking a quick selfie, it was time to get on with it. The climb up Battle Mountain isn’t long, only 4 miles, but it is on the spicy side. The average gradient of the climb is 5.3 percent but some segments go up to 8 percent. 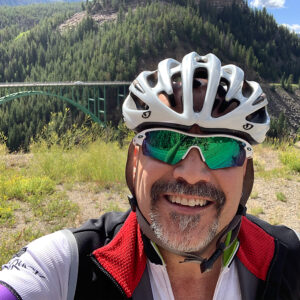 The author with the historic Red Cliff Bridge in the background. Photo: A.V. Schmit

On the plus side, the views into the valley are spectacular, and the variegated color of the sedimentary rock is equally beautiful. Once you crest the Battle Mountain climb, it’s time for another swift downhill to Minturn, Colorado. The aid station is located just before town at Little Beach Park.

After filling my bottles and grabbing a snack, I saw a woman in a bright pink Meat Fight jersey and shorts. Her name was Margot Morris, and she is from Dallas, which her accent made abundantly clear.

“One of my friends told me The Copper Triangle was prettier than The Triple Bypass, so I came to find out for myself,” Morris said. “Boy were they right. What a great ride.” 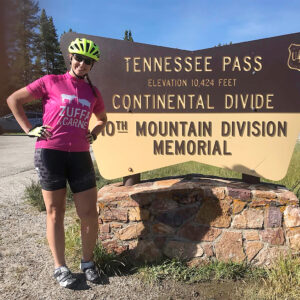 Margot Morris, of Dallas, Texas, at the summit of Tennessee Pass. Photo: Unknown

For those of you not familiar with Meat Fight, it’s a grass roots Multiple Sclerosis charity that started in 2010 in Dallas, Texas. They use Texans’ love of barbecue to raise money to purchase bikes for individuals living with MS. Research has shown that maintaining activity levels is a positive way to counteract the symptoms for many patients living with relapsing-remitting MS. To date they have raised more than 3 million dollars and given away 331 bicycles, in addition to funding over 70 individuals to compete in endurance events including: half marathons, marathons or Ironman 70.3 events.

After a brief chat with Morris, it was time get back on the bike and head to Vail. I’m not gonna’ lie, the climbs on The Copper Triangle are a challenge. But for me, the grind up the Vail Valley before you hit the pass is tough. You’re a little tired from more than 60 miles in the saddle and that gradual hill just seems to last forever.

The second to the last aid station on the route is at the end of the frontage road, just before the bike path is blocked to automobile traffic. That’s where I ran into my friend Erin McGinnis. She is the 2022 Copper Triangle Queen of the Mountains, having completed the 3-mile-long timed section of Vail Pass in 16:23.

“I think it is a wonderful organization that the ride supports,” said McGinnis. She was speaking about the Davis Phinney Foundation which is a beneficiary of proceeds from The Copper Triangle. “Davis Phinney and Connie Carpenter are legends in the Colorado cycling community. Supporting Parkinson’s research and support services thru the foundation is a great way to honor their legacy.”

After the climb up Vail Pass, comes the last downhill of the ride. It is on the bike path, so you really can’t “let it fly” but still pretty fun. Once down in the village of Copper Mountain riders are greeted by the applause of friends and family and more than a few cow bells. And who can’t use “more cow bell?” Lunch, included in the registration fee, was pasta with marinara sauce, a green salad with cherry tomatoes and cucumbers, chicken breast and a cookie. Gluten-free options were available as well. 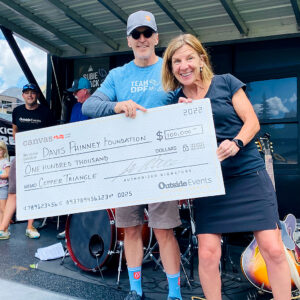 Davis Phinney, left, and Polly Dawkins accepting the $100,000 from Outside Events on behalf of the Davis Phinney Foundation. Photo: Pat Mayben.

The most moving part of the day was when Scott Olmsted from Outside Events presented a check for $100,000 to Davis Phinney and Connie Carpenter Phinney to benefit the Davis Phinney Foundation. The Foundation is focused on helping people with Parkinson’s live well today, including funding quality-of-life research and creating essential programs, educational content, and events for those affected by Parkinson’s. This donation will go a long way in serving the Parkinson’s community.

“We are proud to partner with Outside Events and benefit from the generosity of the cycling community for the past 16 years,” said Polly Dawkins, Executive Director of the Davis Phinney Foundation. “The Copper Triangle is an exceptionally well-run event with a top-notch team. We look forward to participating every year, raising crucial funding, and sharing our message that it IS possible to live well with Parkinson’s.”

“We are grateful to Outside Events for their continued support for our mission,” she added. “Cycling is in the DNA of the Foundation, the Copper Triangle is a perfect partner to help drive our mission forward.”

To wrap things up, it was another great day on the bike. A little slower than usual, I’ve been having some low back / pelvis issues, but still a respectable time of 6.5 hours in the saddle. The Copper Triangle is just one of my favorite Colorado rides. The folks from Outside Events, from Tracy Powers at registration to Scott Olmsted leading the team, just do a great job putting on the event.

Editor’s Note: Outside Events provided a no-cost registration for the author, but that in no way characterized the tone or content of the article. 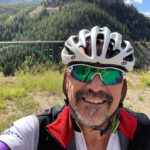