I’m super sad this happened. Tim was a very well-liked and respected cyclist/mechanic. Super nice guy. He worked at Cafe Velo when it opened. 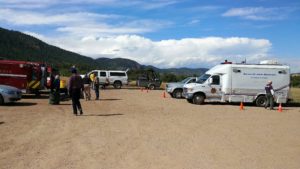 Watkins was reported missing after no one had seen or heard from him since Thursday, when he left to go cycling near Mount Herman.

After search and rescue efforts, a body was found near Mt. Herman on Sunday.

The El Paso County Sheriff’s Office has not confirmed if the body belongs to Tim Watkins.

After an autopsy the sheriffs office will be able to release more details, death is being ruled as suspicious.

A well-known member in the Palmer Lake and cycling communities, many people are honoring him along with the contributions he made to those around.

“When I got the news it was hard to believe again you’re talking about a guy who was a local pioneer,” said Niall Byrne, a friend of Tim Watkins.

The crowd lit candles and read passages Watkins enjoyed, as people remembered him as a friend or a prominent member of the Palmer Lake “Yule Log” tradition.

“It’s not surprising how many people showed up to this event,” said Story.