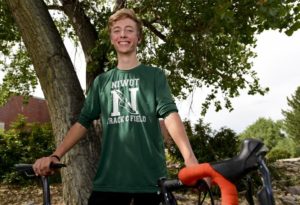 NIWOT — Depending on the season, high school junior Kenny Lang is a member of either the Niwot High School cross country team or the Melton Design Build/GS CIAO Juniors cycling team.

Lately, the 16-year-old has begun to realize how his performance in one has begun to positively impact his ability to compete in the other. This summer, Lang won state cycling titles for his junior men’s 15-16 age group in three separate events.

Simultaneously, Lang captured a shining finish to his brilliant summer cycling season and gave himself the head start he needed to prime a breakout cross country campaign in the fall.

“Cycling really helps with leg strength and stuff like that, but also the competitiveness that you have to use when racing,” Lang said. “All the tactics and the pressure are the same so it has made me a much stronger runner. Now I can kind of jump right into the cross country season.”