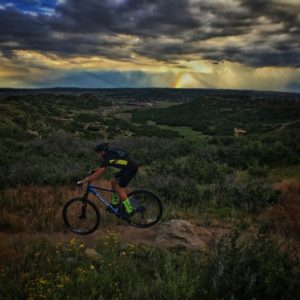 RaceCO founder Kyle Sipes was inspired to create a grassroots mountain bike race series that would be fun for racers and spectators alike. He moved to Colorado from California and was inspired to create the Race the MAC series, based on his experience as a participant in a grassroots mountain bike race in Irvine, California. In looking at the Colorado racing scene, he noticed that most series were based in the central Front Range (Golden/Boulder) and that the races catered only to the racer’s experience. His idea was to bring a racing festival to the southern Metro Denver area. The Miller Activity Center (MAC) opened up in October 2014, which includes a 6 mile mountain bike loop, and presented Kyle with the perfect venue for his vision. Kyle partnered up with Bryan Derstine and RaceCO was born.

In planning the series, RaceCO sought feedback from professional racers and industry leaders on what they thought made events successful and where events stumbled. Based on the feedback, the team developed the series, focusing on a community vibe and a family friendly experience with the goal that everyone, elites and beginners alike, is taken care of and has a great time.

2015 was RaceCO’s inaugural season. They hosted the first Ride the MAC series, which consisted of 5 races in the summer of 2015, with an average of 160 racers per event. RaceCO secured Grist Brewing Company as an event sponsor, who provided free beer for the racers, obtained local and national bike vendors for give-aways at each race, and developed a rotating food truck list. The result: a race series where EVERYONE – racers and spectators – had a fantastic time. 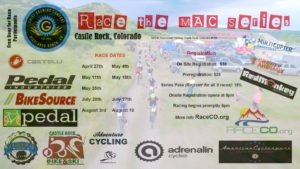 Kyle and Bryan describe 2016 as a pivotal year to “kick ass” and to grow the race series. They’ve expanded the event from 5 to 9 races: the first one is on April 27th and the series goes through August 10th (Wednesday nights). Each race has a local bicycle shop as an event sponsor and the group has approximately $3,000 in giveaways for each race. The giveaways range from grab-bag items like shirts and gloves, to high-end bike pumps, to Shimano XT11 group sets, and wheels.

Each race has multiple entry classes, ranging from beginners (who do a single 6 mile loop), sport class (2 loops), open class (3 loops), and also offer Clydesdale, single-speed, masters, and an “everything” class if you’d like to race your CX or fat bike. Entry for each race is a bargain at $25 ($30 on-site) and they offer a 15% discount if you register for the entire 9-event series. This race series is an unsanctioned event (meaning no USA Cycling license is required), which was an intentional decision by RaceCO to keep the overall price of racing this series low. 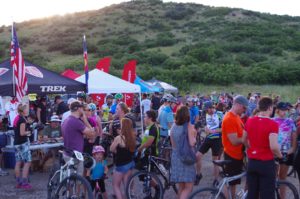 Special guest for the first race of the series (April 27) is two-time Olympian and mountain bike World Champion Alison Dunlap! How many times can you say you were in the same race as an Olympian?!?!?