Still healing from the broken ribs, I decided to meet up with 303’s resident Hippie, Bill Plock, at the 4th Annual Feedback Cup in Golden. This course was unlike anything I have ever seen. There was a section that would have literally killed me. Crazy bumpy, dirt section, steep, and a sharp left turn at the bottom of the hill.

The race venue layout was common of most CX events I’ve attended up to that point. Team tents, food trucks, Feedback Sports Omnium Trainers with athletes warming up, and sponsors. Blue Competition Cycles had an entire line up of CX and MTBs on display, which peaked my curiosity. As I walked over I noticed a couple familiar faces…Bill and Orli (Blue’s US Sales Manager) were chatting away.

Pleasantries were exchanged and I began to tell Orli about the project Clint and I were working on and the last piece to our puzzle that was missing – a bike sponsor. He seemed extremely interested. After some negotiations, Blue agreed to sponsor the project and provide a beautiful new ride…a Blue Norcross EX.

As exciting as it was to learn a new bike would be on its way, I was a bit overwhelmed at the same time. Sure, I’ve had sponsors in the past, but most were discounts on apparel, nutrition, and other race related products. A bike…that’s unchartered territory for me. Only professional athletes have bike sponsors. Not a middle of the pack (or sometimes at the back) age grouper like me. Nonetheless, I was grateful and the rest of my team at 303Media (303Cycling/303Triathlon) were thrilled for this opportunity.

Within two weeks after the deal was done, I received a call for Orli that my bike had arrived. I made the trek from Denver up to Lafayette and loaded up the box containing the new ride. Orli took one look at my car (MINI Cooper S) and wondered if it would fit. I assured him that it would. After a bit of finagling, all the doors were shut and I was on my way. 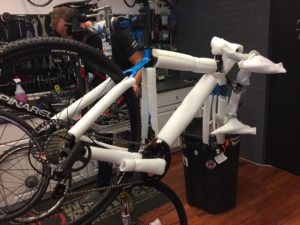 Few days later, the bike and I made our way to TriBella. They’ve been my shop since I started racing triathlons, so it only made sense to have them be part of this journey. Daniel, my long-time bike fitter, basically talked me through “building” the bike. Luckily most of the parts were already assembled. All I had to do was install the wheels and mount the handlebars. I also got a super quick lesson in hydraulic disc brakes. Under no circumstances…DO NOT press on the brakes if the wheels are not installed. Got it.

About an hour later I had Daniel check my handiwork, and then we went into the Denver Fit Loft studio to fine tune the fit. New stem and a few adjustments, we were good to go.

…and we shall call him Maximiliano (Max for short). I name all my bikes. The relationship I have with each of my bikes is a special one. They bring me so much joy, and that alone is deserving of a name.

One thought on “Intro to Cyclocross – Part 3”