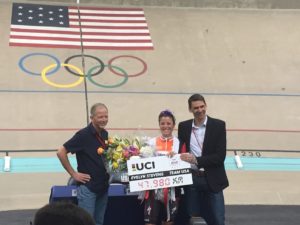 Today the Wall Street Journal reported, “Last Lap for U.S. Bike idol Evelyn Stevens – At the end of this season, the 33-year-old American plans to say goodbye to professional racing…”

Boulder Coach Neal Henderson posted, “It’s been a great run for you Evelyn Stevens and there’s still lots more great things ahead for you Evie. Thanks for letting me play a part in your bike racing journey!”

We love what Stevens has done for raising awareness of women in cycling, and especially the fact that the world has sat up and taken notice. The WSJ says,

At the same time, Stevens has become one of women’s cycling’s most recognizable ambassadors, not only because of her success and relatable story, but also her upbeat attitude. There have been moments in grueling races where it appeared Stevens was literally smiling through the pain.