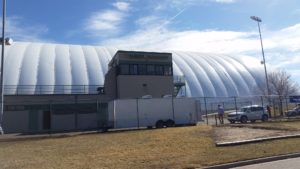 As I’m writing this, the event ended just a few hours ago and I’m still reeling in excitement that I was able to witness a world record being set at the US Olympic Training Center Velodrome in Colorado Springs! On January 22nd, 2016, Bridie O’Donnell rode 46.882km in Adelaide, Australia to set what was the record. On February 27, 2016, Evelyn Stevens set out to smash that. 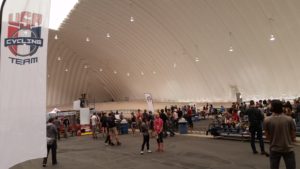 This was a difficult event to get to see in person, as attendance was extremely limited. (This was due to fire codes. While the facility is large, the exit points are pretty restricted so it make sense, and was confirmed by my friend Mark, who is not only a huge cycling fan, but also a firefighter.) The available tickets for spectators sold out this past Tuesday in 5 minutes! 303 Ambassador Scott Downes was also in attendance and provided our 303cycling instagram coverage.

The event was scheduled to start at noon. I arrived at the velodrome a little before 11am and picked up my media credential. All spectators, media, and event staff were required to wear the credential while inside the bubble, and it also makes a neat souvenir! 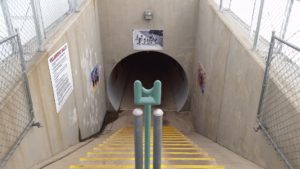 The US Olympic Training Center Velodrome has only had a cover on it for a few months now, and this was my first time in it since the update. Walking into the building requires going through two sets of doors – pretty much an airlock, as the bubble has to stay inflated. Then you walk down the stairs through a tunnel that goes under the track and then up a set of stairs to the infield of the velodrome.

The hour before the event passed pretty quickly. Spectators were arriving, a few athletes were warming up for some pre-attempt races on the track. The bike mechanics were working on Evie’s bike, her coach Neal Henderson and his help were making sure the technology was set so they could monitor her progress. During the attempt she is not allowed to see any data other than her splits. Because this was an official UCI attempt, their officials were also on hand to collect the data that they need to certify it.

Just before noon, the national anthem was played and Evelyn got ready to go. She would be going around this 333m track for an hour. The only scenery that would change would be the position of the spectators, but she wouldn’t notice. Her focus would be on the black line of the track and the splits on Neal’s iPad.

Three-two-one-GO! Evie’s job was to pedal and coach Neal provided splits every lap. Every half lap he’d hit the lap timer, and when she passed the start line, he’d yell her most recent split. Her times were around 24.8s to 25.0s consistently. Around and around she went, staying at a very steady pace. The crowd cheered as she went by and then we all settled into watching, cheering, watching, and cheering. We had some live commentary from Larry Grossman, and over in a corner of the infield Brad Sohner and Meredith Miller were commentating on the live stream. 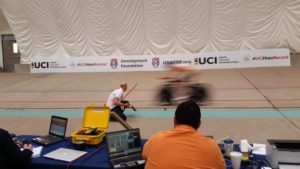 As the end of the hour approached, you could see in Evie’s face she was digging deep. The crowd got louder, most of them congregated near the start line area, cheering and pounding on the plexiglass on the railing. Cowbells could be heard. Her pace bumped up a little with about 15 minutes to go, but it seemed that was the top of her limit and she put out some slightly slower splits, and then settled back into what she had been holding the entire time.

With 2 minutes to go it was clear she wasn’t slowing down and was going to get the record and we waiting with great anticipation to know what that new world record would be. It is now 47.980km.

After the attempt, there was a brief press conference with the USA Cycling CEO, Derek Bouchard-Hall, Evelyn, and Neal, where we learned a little bit about the suffering she felt (“ you can do one more lap” was going through her head. Was it as hard as she thought it was going to be? Yes. She knew she’d suffer and she did!

When asked about how she wobbled a bit out of the corners and hit a few of the bumpers, she stated that you never know your limit until you hit it. She figured the worst thing that could happen if she pushed too hard would be that she’d pass out. Apparently even Neal was a bit worried about her holding her line as he told us he stood back a bit during those final minutes to show her the splits, so if she hit something, the iPad would be the only thing hit and not him!

Congratulations is also in order for Neal Henderson, who has now successfully coached two athletes to the hour record, as Rohan Dennis set the men’s record in Feb of 2015 with 52.491km. (Interesting to note that record has since been broken twice, currently held by Bradley Wiggins at 54.526.) One thing Evelyn mentioned at the press conference is that she hopes she has inspired more women to attempt the record, which would be similar to what we’ve seen with men’s attempts since Jens Voigt set a men’s record in 2014.

The cycling community in attendance is very proud of showing what women’s cycling in the United States can do. What’s next for Evie? A celebratory dinner with the team that helped her achieve her goal of the UCI Hour Record, a few days home in San Francisco, and then off to Europe for the race season. I’m definitely looking forward to seeing what she, and women’s cycling, does next!