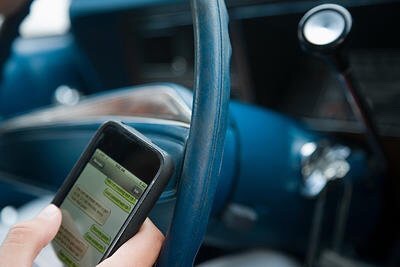 Zac Rudolph was biking through an intersection in his hometown of Boulder, Colorado, six years ago when, out of the corner of his eye, he saw a small Mazda hatchback heading directly for him. He remembers the teenage driver looking up from her lap, her eyes suddenly wide with surprise, right before he was struck and thrown over the hood of the car.

Police soon arrived, but only ticketed the driver for failure to yield while turning left. Rudolph suffered a concussion, as well as some bumps and bruises, while his Cervélo road bike was completely destroyed. Perhaps worst of all, his comfort on a bike disappeared.

“I ride pretty sporadically now,” Rudolph says. “I tried to work through it, but it’s hard. I’d been riding my bike for 15 years or so at that time, and that incident definitely changed my attitude toward riding on the road.”

Rudolph’s encounter with a distracted driver is far from an isolated case. Texting while driving was a major factor in more than 16,000 road deaths between 2002 and 2007, according to a study published in the American Journal of Public Health. Road deaths rose 6 percent over 2015 and 14 percent over 2014, the largest two-year increase in more than 50 years, per the National Safety Council.

The main reason for the jump, according to transportation experts? Distracted driving. A conservative 2013 estimate by the National Highway Traffic Safety Administration found that 10 percent of all traffic deaths result from a driver texting or otherwise interacting with a cell phone.