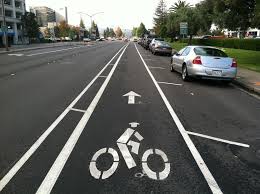 We’re eager to get the word out about our campaign to increase funding for bike lanes and sidewalks.

Here’s an excerpt from a great streetsblog story with the overview:

A new coalition of transportation advocates wants to combat the Hancock administration’s habit of shorting biking and walking infrastructure while heaping taxpayer funds on road expansions.

The Denver Streets Partnership says the city needs to invest $40 million a year over the next 20 years to build out a 21st century street network. That means giving Denverites good options to get around without driving a car, via high-quality networks of sidewalks and bike lanes — promised but unfunded — that connect people to convenient transit. DSP asked Mayor Michael Hancock for as much in a letter sent to his office Tuesday [PDF]. The group also called for expanding the city’s underfunded bike-share program, B-Cycle.

“People in Denver want better options to get around safely and they want to see pedestrian and bicycle networks funded and built at a faster pace,” said Piep van Heuven, Denver director of Bicycle Colorado, which leads DSP.

It’s easy for Denver residents to get their message to the city sent via this Messaging System.

The messaging system works for those with a Denver address and selects the correct city councilman for the address.