Triny Willerton is a cyclist hit by a car on May 8th. She survived and is recovering and the story written by the Boulder Daily Camera and partially published here on 303cycling was inaccurate. After questioning Triny, the police re-questioned the driver when she was able to tell her story and he admitted his original story wasn’t accurate….the investigation is still on-going…. 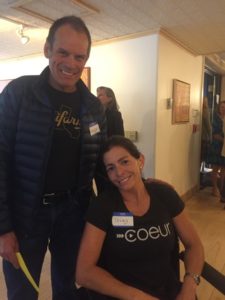 “Any doubts I ever had about the existence of God are now completely gone,” says Triny after being hit by a car on Nelson road on May 8th, exactly one year to the day, and in the exact same location that took the life of Charles Crenshaw. More on that coincidence in a moment.

But first, what really happened to Triny. She was hit by motorist carelessly passing her on the left, on the opposite side of the road, on the other side of the double yellow line, as she made a legal left turn north onto 65th from Nelson road. That is what happened.

The initial story posted by the Boulder Daily Camera and shared here on on 303cycling was incorrect—or at least incomplete. The initial reports based on a false account from the driver, were simply false. It was stated that Triny made a left turn onto 65th from Nelson and that she tried to execute that turn from the shoulder on the right side of the road and turned into an on coming vehicle. That was what the driver originally told police and as is often the case in a bike/car collision, physical evidence is often disturbed by people moving the bike out of the way or other debris that can provide crucial clues as to what happened.

Triny was rushed to the hospital and didn’t have a chance to tell her side of the story at the scene and authorities seemingly filed an initial accident report based on the drivers story alone. But then when State Patrol Trooper Lewis came to Triny’s home a week later to get her statement and started to recreate the scene, it become evident the driver wasn’t telling the truth.

The driver was then confronted with Triny’s recollection and changed his story. There were two witnesses to the crash that had circumstantial evidence to also support Triny’s side of the story.

Triny was actually in the middle of the Nelson Road turning left (north) onto 65th. She had signaled to do so and had legally taken the lane. The driver, reportedly speeding by one of the witnesses who was passed by the driver minutes earlier further west on Nelson, came upon Triny turning. Rather than slow down and properly yield to her turning and pass safely on the right, he decided to cross double yellow lines and pass her on her left as she turned left. Unbelievable really. She was traveling east but was hit on the westbound side of Nelson and flung onto the roadway. It’s not clear where the vehicle struck her and her bike. 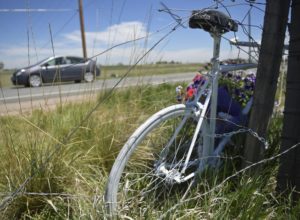 The driver did stop, as did two other vehicles, both traveling eastbound and both ironically nurses. One was driven by a close friend of Charles Crenshaw who was on her way to lay flowers on the white bike memorializing the spot of his death exactly a year prior. Triny is convinced that Charles is now her guardian angel. 911 was called, an ambulance arrived and she was rushed to the hospital.

It doesn’t appear either vehicle saw the collision directly. But they can substantiate they did not see Triny in the shoulder trying to turn clear across the road and they can attest that she was hit on the westbound side of Nelson road.

This accident is still being investigated and Triny is dealing with her injuries and trying to recover. She is grasping with knowing she was within inches of dying. She is an experienced cyclist and was training for the upcoming Ironman Boulder and looking at her beat up bike and with broken parts and pieces, she still doesn’t understand how she survived.

Not only is she dealing with injuries that prevent her from riding her bike and even walking normally, she has had to deal with being falsely accused of causing the crash. Having to constantly defend herself and rid this shadow of fault while coping with survivors guilt and rehabilitating her injuries is exhausting and mentally defeating at times.

But, this all begs the question of why many crashes involving cyclists and drivers are falsely reported. The fingers can be pointed many directions and at many people. In this case, a false initial testimony with a rush in the media to get the “story out” is the primary cause of the incorrect story. We at 303 feel bad in not doing our due diligence either.

So often the evidence is moved before the investigation can begin. Unfortunately many times, cyclists don’t survive to tell the story. Bikes don’t fair well versus vehicles clearly, so it’s not easy to always determine what happened simply with comparing damage to a car caused by a bike. Lets be honest, there also can be a bias that the cyclist did something to cause the crash. Cyclists can sometimes be their own worst enemy when it comes to a certain bias that can happen as well. Erratic behavior and not following traffic laws can sometimes lead to assumptions that cyclists may have broken a road rule leading to the accident.

303cycling recently published several stories by Adelaide Perr ( linked here and here) who recounted a similar experience a few years ago and shared how the false initial report happened and how that hindered her recovery and reconciliation of fault and expenses. There can be a break down of information passed on between police and the media and often resources aren’t available for adequate follow up and so often we as media move on the next story.

But what’s left in the wake of these crashes is life changing (or life taking) for all involved and a bike/motorist crash deserves the same treatment as any other collision.

Look for a future article on how we as cyclist can prepare ourselves for the best possible outcome if we are hit or endangered by a motorist. Also look for ideas on how to prevent being hit with equipment such as lighting and clothing. There are steps to take at an accident that can make a big difference on the investigation. There are also insurance options that can help this financially painful experience. There are specific cycling insurance products that are critical that most cyclists probably don’t know exist.