Early morning, August 18th. I had fully reclined the driver’s seat of my Chevy Sonic (what Primal Events Director Pat Mayben affectionately calls “The Scamp” due to it’s compact size and my own erratic navigation of the vehicle) and was frantically trying to ply my legs into a set of navy bibs without fully exposing myself to the pedestrians walking along Denver’s Blake Street. I dug through team issued-luggage in search of a heart rate strap, glanced down at my phone and realized I had no more time to spare. I grabbed a set of pale blue and white sunglasses – every bit of cycling apparel I have owned for the last five years has been in a shade of Novo Nordisk blue and white – took a final swill of bitter hotel coffee from a flimsy paper cup and slammed shut the car door.

I was tired. Slightly hungover. I’d spent Friday night listening to the Kills on stage at Velorama and waiting for Modest Mouse. (They failed to show, forcing RPM to make last-minute changes to Saturday’s music line-up and honor Friday’s tickets on Saturday, too.) I looked at the graffiti along Park Avenue, and I wondered whether I really want to be there.

Years ago, I would never have spent the night before a race drinking and dancing, eating thick slabs of Cheesecake in a bed at the Crowne Palace and considering another glass of wine. Years ago, I wouldn’t have arrived at the 8:30am VIP ride at 8:27, tossed my bicycle against a gate and raced to pee with only minutes to spare before the start.

Years ago, I was in love with something that didn’t love me back. I’d spent years sitting on wheels, getting spat out the back of races anytime the power cranked past my limit, watching younger riders blow past. I was falling out of love with cycling. A week earlier, I had shown up at the Bannock Street Crit with no desire left to put myself in the “hurt box,” and it showed. I raced so half-heartedly that my long-time friend and cycling photographer, Ryan Muncy, approached me and asked, Are you still having fun?

I’d been carrying around a mountain of ambivalence for months, trying to decide how something that was so integral to my career and my life and who I am could also be something about which I had become deeply resentful. And I carried that to the start of Saturday’s ride.

Then, we started rolling. The group was a mess of staccato starts and stops, near misses and squealing brakes. Mostly, though, it was a group of friends just riding bicycles. I pulled alongside up-and-coming talent, Petra Schmidtmann. I laughed with my longtime training partner and dear friend, Peg Hallberg. I talked to my friends at Wish For Wheels, who share my own dedication to getting kids on bikes. I joked with Jason Carolan of Flexential about cycling sponsorships and swapped racing stories with the guys from the Primal-Audi Denver team. I remembered that I love being on the bicycle with friends, or people I don’t know who are about to become friends.

At 10:55am, I made my way through a long, gated chute toward the Pro-Am Criterium start. For weeks, I had been considering whether this would be my last race….whether I wanted to round-out a decade of pedaling increasingly faster circles at home, in Denver. Only a handful of people knew how much the decision had weighed on me : My husband, my kids, my teammates Clark Eckel and Lonny Knabe, and my business partner, Joe.

It’s worth interjecting that Velorama is, itself, something of a fiasco. Last year, I publicly asserted that I could hand-over the organization of a UCI bicycle race to a group of preschoolers, and they might be as capable of devising a plan for the venue and race execution as was RPM. After months of public comment and multiple meetings (many of which I attended to give feedback), I can tell you that improvements were made, but not to the extent they should have been.

The concert venue was, again, absurdly large. Merchants and vendors needed to be consolidated, which was a primary complaint just one year ago. Beer lines were far too long, and they failed to offer separate vendors for water and soda while simultaneously preventing people from bringing in their own beverages. (Nothing ticks people off more than standing in the hot sun for hours with no access to water. Except, maybe, paying $55 for a concert ticket only to spend half the night waiting in line for a beer.)

I received multiple texts from other racers who were unclear as to the location of the start/finish of the criterium. The USA Cycling flyer was vague, and no one onsite knew the answer. The bathrooms were poorly located in terms of proximity to the start line (and every racer is going to need facility access prior to go time). But the real race issue was not organization. It was safety.

I stood a few feet from the registration tent, a handful of safety pins digging into my fist, and I unzipped my jersey and unfolded a crumpled race number. I looked up to the sound of barriers scraping cement and carbon cracking on pavement. A pile of riders from the Fyxation Fixed Gear crit lay on the tarmac, one with his head wedged squarely between to barriers.

The course had two long straightaways with four tight corners. At the top of the course, there was a turn so snug it was impossible to clear without going as wide as possible, with the apex of the turn slightly off-camber and a change from tarmac to cement right in the middle. You’d careen sharply left only to be spit out into a blockade of barriers with feet jutting out on the course, and then try and adjust position into a narrow chute up ahead. None of the barriers were tied together – a basic safety issue highlighted by the death of Kansas cyclist Casey Saunders who was killed in a crit race when an unrestrained barrier pierced his skull, killing him instantly.

I watched as a rider lay unmoving, face down on the pavement. People frantically moved barriers, pulled riders from the mound on top of him. The ambulance came and carted him off course as a group of us stood there. 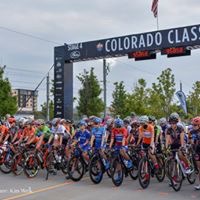 I looked at Palmares riders Ashley King and Katie Harrar. A few other women had gathered around us. We questioned aloud whether to start the race. We all conceded that the course was absurdly dangerous and ill-conceived. A group of women from UHC joined us to express their concerns. Veteran coach and long-time racer Sue Lloyd looked at us and said, “You girls be careful out there. Take care of each other.” The sky opened up, and rain started coming down in relentless sheets.

I took a lap. I high-fived USAC Ref Tim Madden. I wondered if I wanted to do this. I wondered if the price tag was too big. I heard my friend, retired pro Mike Friedman, ask me how much I value my brain. I told myself that I should start. I could always pull the plug if it got messy. Some of the other girls decided not to begin at all. A few more would start only to DNF later on.

The first two laps went out hard, and then the race settled in. I did, too. I found myself somewhere in the middle with Erin Agee from Primal and a rider from GP Velotek. We quickly organized and cooperated to finish the race and avoid the crashes. They were both good wheels, easy lines to follow, and our effort was seamless lap after lap. We traded pulls, gasping for air and inhaling the spray from the wet streets as it came off the wheel in front of us, our eyes stinging from the salt and sand off the pavement. 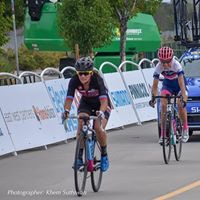 Every lap, every corner of the race, I heard my name. I looked up to see my friends banging on the gates, snapping photos, laughing and cheering and willing me to keep going. I saw my sponsors lined up in the VIP tent, imploring me to keep pushing. Crowds were shifting, leaning over the barriers, ringing bells in the rain. It became everything a bike race should be : courageous and terrifying and technical and hard and fast and cooperative and competitive and fun.

I crossed the line, and found Pat Mayben at the finish, holding warm jackets for Erin and I. We were covered in dirt, chewing the grit we had gasped from the road and the rain. Other Primal girls made their way over, and we tried to amble our way toward results. (We never did find them – yet another organizational snafu. Instead, Tim Madden just handed us the certified sheet.) A couple of the girls had placed, though they wouldn’t get to stand on a podium because none could be found. Instead, a tiny green cart would serve as the step for the winner. Somehow, though, it was enough.

I glanced down at the phone in my pocket to see a massage from Joe, letting me know he’d tried to make it to the race but got caught in traffic, and would stream it instead. I looked to my left and saw Peg, holding a hot cup of coffee for me. I read texts from teammates and friends, telling me that I had done well in tough circumstances. I felt lucky to have ridden my way into this life with these people.

In the middle of the biggest disaster of a bicycle race I have seen since the last Velorama, I remembered that I love bicycle racing. It has broken my heart more than once, and yet, it carries my soul forward. I remembered that life, like the race itself, is about the challenges you choose and the conditions you don’t, and the people who make it all worthwhile.

I met my kids in the VIP tent a couple of hours later as they grazed through a sea of cupcakes and popcorn. I remembered all the years when they sat in a Team Novo Nordisk tent at USA Pro Challenge, eating petits fours with the other little children and clutching my teammates race numbers, and watching them conduct media interviews. I tried to count how many hours of their young lives have been traded like this. I watched my daughter ask Tyler Hamilton if he had ever seen a bicycle race. (He responded by nodding patiently and smiling, saying, “Yes, I’ve even done a few.”) I looked at them as they smiled and danced to Cold War Kids playing on stage. I smiled at my husband as he looked at me gently and said, “You seem happy.”

Velorama got a lot of things really, really wrong… but it still managed to find the core of cycling. The spirit of professional bike racing hasn’t left Colorado. The soul of US cycling is alive and thriving, even amid starts and stops and disorganized mishaps.

I stretched out under the endless blue sky after the last of the clouds cleared out. I smiled, wrung out my soaked jersey next to The Scamp, and packed up my bike. I thought about the races up ahead.