I started mountain biking 2 years ago, as a way to combat Ironman burnout. I was strong, had great fitness, and I thought “I’ve got this”. What I naively didn’t understand was how technique driven mountain biking was. After my second ride left me angry-crying on the side of the mountain in frustration, I decided I needed professional help and took a lesson through a club. Two years later and I’m much better but I’m finding that I lacked the skill to tackle the hard stuff. I have the strength and courage but I just don’t have the knowledge to ride up rocky things or to successfully go up a right handed switchback. It was like I had a puzzle in front of me but lacked the pieces to fill in the blanks. I knew that an immersive 2-day skills camp would be the ticket to filling in the skill gaps and jumped at the chance to attend.

I picked the Alison Dunlap Adventure Camp Intermediate MTB camp. I’ve had friends who have attended her camp and really enjoyed it, plus the timing and location worked really well for me. 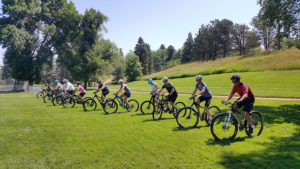 Saturday was spent at a grassy park working on skill fundamentals. At first, we went over some basic body positions, but as the day progressed, those basics created solid foundations for more challenging skills. We did a “slow race” where we learned some solid balance and handling skills, we learned body positioning and bike balance for cornering, and then we learned wheel lifts. And the most mind-blowing thing I learned was that you can do switchbacks BETTER if you engage your rear brake a bit, which helps give you some traction on the Front Range’s sandy trails. Each skill session consisted of a talk, a demonstration, and then practice. The class size was 15 people and there were 3 instructors (Alison, Katie, and Stephanie), which meant that you got a ton of attention. Each skill session took about 15-30 minutes, depending on the drill we were learning, and I think everyone felt pretty confident by the time we moved onto the next skill. 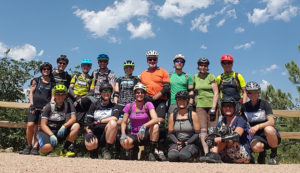 Sunday consisted of a few more skills in the park and then practical application on the trail! Sunday’s park-based skill session was a refresh on wheel lifts (with the addition of J-hops and bunny hops) and fast cornering around a baseball diamond. Once on the trail, we divided into 2 smaller groups, which meant we had more space for sessioning trail features. We learned how to pick lines and scan the trail, to navigate some narrow/tricky rocky corners, work on our fast cornering, going up ledges, and dropping down ledges. Initially, I was a bit nervous about doing all of these things in front of people. I don’t like people watching me, especially as I try to do hard and scary things. I was relieved to find out that pretty much everyone was struggling with the same thing and everyone offered encouragement and cheers to all of the other riders. And you could watch others go through the trail features and learn from what they did. 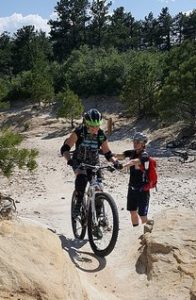 For me, some things were scary (particularly wheel lifts UP ledges), but with some self pep-talks and telling myself “I can do hard things”, along with cues from our instructors, and well, having our instructors literally be safety nets, I was more than ok. With their guidance, I was able to do some things that I’ve been unable to figure out in the past. Before, I was trying to just get by on brute strength, or as my husband would say “just go faster”. Now I know that mountain biking is more about finesse combined with strength. I now know that going slower sometimes helps you to get over the obstacles rather than trying to bash over them. And I’ve proved to myself can actually do hard things. I can’t wait to go practice my new skills out on the trail.